Father puts himself and his two sons at risk

A Swedish family has shown an amazing range of options to do it the wrong way: The family, father and two sons (11 and 20 years old), came to Longyearbyen as individual tourists and rented snow scooters and satellite phone (at least!) for a private trip to Barentsburg. As even groups accompanied by guides had decided to cancel their trips to Barentsburg and take alternative routes because of adverse weather conditions, the family received warnings in Longyearbyen to change their plans, preferably in favour of a guided tour. They went anyway, spent a night in Barentsburg and came into trouble on the way back – again after ignoring a warning and advice to wait in Barentsburg for better weather.

The 3 got stuck in Semmeldalen and called for help. Rescue teams tried repeatedly with snow scooters and helicopter, but had to turn around because of difficult conditions. Only when the weather improved slightly near midnight, could rescuers reach the family, who was already affected by wet and cold.

The Sysselmannen strongly recommends individual tourists without experience to join guided tours and to consider weather forecast, advice and warnings from authorities and locals carefully. As the family decided to ignore these common sense rules completely, they may have to face the bill for the search and rescue operation, which is estimated around 15.000 Euro.

Should be taken seriously: winter arctic 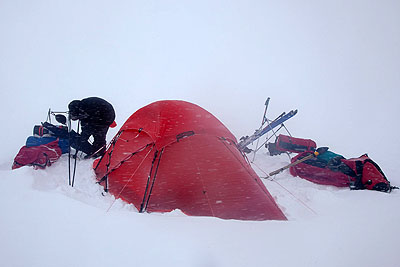 Addendum: In a letter to the editor (Svalbardposten 10/2011), the family states that, before starting the return trip from Barentsburg, the Sysselmannen advised that they should try, rather than waiting for better weather in Barentsburg. They also write that technical failure of one of the snowmobiles and bad battery performance of the rented satellite phone contributed to the worsening of the situation, finally leading to a call for help.