In August 2011, a 17 year old student was killed and 4 other ones injured when a very aggressive polar bear attacked their camp (see earlier articles on these pages). The Sysselmannen has now decided to close the case. According to Norwegian authorities, the cause for the tragic event was “a number of unfortunate circumstances that led to the tragic accident”, but not involving any criminal offence. The case will accordingly be closed.

The parents do not agree with the Sysselmannen’s decision to close the case and have filed a complaint to The public prosecutors’ office of Troms and Finnmark.

The polar bear that attacked the group in Tempelfjorden was at least has hungry as this very thin bear in Duvefjord (Nordaustland). Additionally it had strong pain from the bad condition of his teeth. 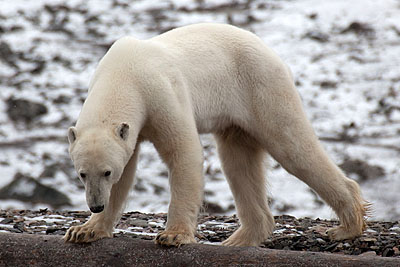