Polar bears in the polar night

Several polar bear observations close to Longyearbyen were reported within just a few weeks. Not all observations could be confirmed, but some are beyond any doubt, such as the fresh tracks seen yesterday in Adventdalen close to Longyearbyen. The Sysselmannen reminds all who are moving around in the field to to so with care, being alert and carrying adequate weapons.

Other than that, it is pretty calm these days in and around Spitsbergen.

Polar bear tracks: quite impressive during daylight. Even more so in darkness! 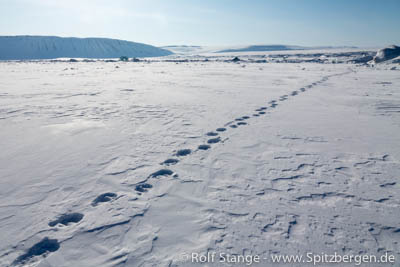