The christmas tree that has recently been set up in Longyearbyen has been called the worst one in Norway by several major media of the country (Nordlys, TV2). The local newspaper Svalbardposten has devoted two full pages to the tree and asked passers-by about their opinion. These were mixed, including comments like “a bit funny”, “a bit thin”, “aerodynamic” and “thin branch”, which speak a clear language.

Longyearbyen’s christmas tree is traditionally donated by Tromsø community, who has sent the tree up as flight cargo this year. According to media, the carrier had requested the tree not to be too volumous. After photos had started to circulate in media, it was quickly decided in Tromsø to send a new tree – this time by ship, so the new tree will certainly be more handsome and is expected to satisfy critics in Longyearbyen and elsewhere. Well, then – merry christmas! 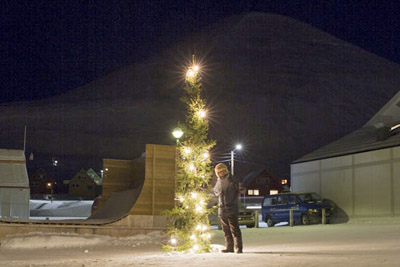