Reindeer can see within the spectrum of UV-radiation

News from the world of the reindeer, who are currently facing hard times in the Arctic with the prevailing polar night. The toughest times will, however, come in spring, when the light returns. By then, fat reserves are mostly used up, but snow and ice still make access to food difficult for quite some time.

To survive under such extreme conditions, reindeer have developed a number of astonishing adaptations. These include the ability to see within the UV-spectrum of light. We humans can see from 400 nm to 700 nm: this is the spectrum of (for us) visible light, the rainbow colours. We cannot see anything beyond, neither wavelenghtes below 400 nm (ultraviolet=UV radiation and shorter) or above 700 nm (infrared radiation and beyond). Quite opposite, UV radiation can be harmful to our eyes and skin (snow blindness and sunburn).

Reindeer can, however, see wavelenghtes down to 320 nm, which is well beyond our own range. It is, however, unknown what exactly they see: colours or greyscale.

This ability may help reindeer to find food: important tundra plants absorb parts of the UV spectrum and may accordingly be more contrast-rich and thus easier to see within the UV spectrum. Being able to see UV may also make orientation easier in whiteout conditions, when visibility for humans is reduced to almost (or actually) zero. It is not dark, but any contrast gets completely lost in true whiteout, so we are then unable to detect or identify objects, distances, terrain features etc. Also predators are easier to detect in advance within the UV spectrum.

With their UV sensing abilities, reindeer are no exception in the animal world. Similar seeing ranges have been found in birds, bats, rodents and insects. It is quite possible that we as humans with our limited seeing ability are the expection rather than the reindeer.

In another article, forskning.no reports about the evolution of reindeer: the genetic diversity of reeindeer has developed largely during the ice ages. Splitting of areas due to inland ice formation in North America has led to genetic splitting and accordingly an increased gene pool especially for tundra reindeer. Those reindeer living in woodlands may in contrast have experienced a reduction of their genetic diversity during ice sheet growth, when their habitat was reduced in area and populations moved together. Especially tundra reindeer may accordingly be quite well suited to adapt to climate and habitat changes. In the past, they have shown an amazing ability to survive a changing environment: they are amongst few species of Quaternary (ice age) megafauna that has survived until modern times, while mammoth, smilodon, megaloceros and many others have disappeared from the planet. 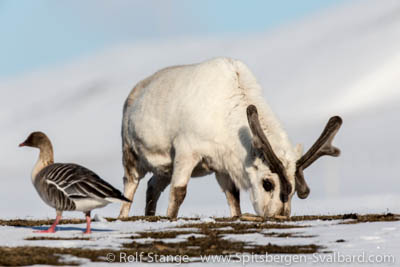