When a zodiac flipped in Fjortende Julibukta (Krossfjord) on June 17 this year, all 13 persons on board fell into the water. They reached the shore soon, but one American woman in her sixties lost consciousness and died, before the rescue helicopter arrived on the scene (see Spitsbergen-Svalbard.com-news from June 2013). The zodiac was one out of nine that belonged to the Sea Spirit, which is operated by the US-American company Quark Expeditions.

A video that was published on youtube includes footage taken shortly after the accident. The weather was appearently calm. This supports the assumption that the wave that turned the zodiac over originated from a calving from the glacier in the bay. The claim that the wave that caused the accident was unforeseen and unexpected seems doubtful when seen in this light. The danger of such waves, which often break violently on the shore and in shallow waters with some delay after the actual calving, is generally well known. Without further detailed knowledge of the incident, it would, however, be pure speculation to infer a lack of experience or any responsibility on behalf of the zodiac driver.

The accident was investigated by the Norwegian prosecutor in Tromsø with regards to juridical relevant behaviour on behalf of ship operator, captain, tour operator and driver. The Sysselmannen has now closed the case, as relevant behaviour was not identified. It is unknown if the family of the woman intends to take further steps.

The Sea Spirit in Hornsund, a few weeks after the accident in Fjortende Julibukta. 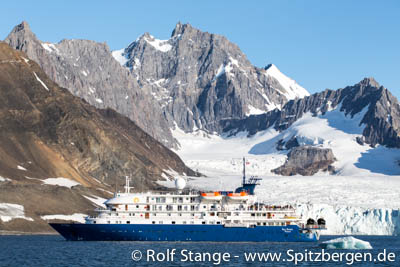