The Svalbard environmental protection act (Svalbardmiljøloven) regulates what can and what can’t be done in Spitsbergen’s nature. It is updated more or less regularly to meet the latest needs. The latest update came into force with the arrival of 2014. There are no major changes relevant for most visitors/tourists.

• Longyearbyen’s council area has been enlarged to include Adventfjord completely. This means that this area is now administrated locally by the elected municipal administration of Longyearbyen and not centrally from Oslo through the appointed Sysselmannen (governor), as all other areas of Spitsbergen which are not part of any council area of the settlements.
• Minor adjustments have been made in the regulations for hunting. So far, young hunters had to be at least 16 years old. Now, it is enough to celebrate one’s 16th birthday in the calendar year in question. This will certainly be very popular in Longyearbyen, where children are introduced to hunting already in the Kindergarten.
• The use of marine hovercraft, already forbidden on land and frozen lakes and rivers, is now also banned from the sea within one mile off shore. The use of such crafts has been matter of controversial debate in Spitsbergen recently. They have been used for research, including expeditions far out into the Arctic Ocean, and locally in Sveagruva for Search and Rescue (SAR) preparedness. Large wet areas near Sveagruva are neither accessible by boat nor by land vehicle, but SAR forces need to be able to reach these areas in case of accidents. There is a small airstrip in Sveagruva. The use of hovercraft remains possible in case of emergencies, but currently not for the purpose of practice. It is not unlikely that SAR forces in Sveagruva will get some more freedom here to enable them to practice with hovercraft. Commercial use of hovercrafts, for example within filming our tourism, has not been an issue so far and is not an option anymore from now on.
• The so-called administration area 10, where visitors can move around without notifying the Sysselmannen in advance, has been enlarge around Ny Ålesund, giving people there more freedom to move around also privately. Most scientists in Ny Ålesund don’t stay long enough to get legal status as residents, so they are as restricted as any other tourist for their private trips. The area they can access without notifying the Sysselmannen now also includes the famous mountains Tre Kroner and a larger part of Forlandsund.

Adventfjord seen from Sukkertoppen near Longyearbyen. This area is now under local administration. 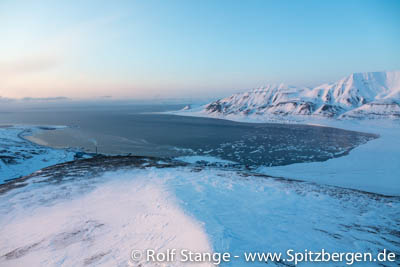