In February, the average temperature was no less than 15 degrees above the long-term average. For weeks, the temperatures have oscillated around freezing. Only the first 10 days, the air was at -10°C or below. Since then, temperate Atlantic airmasses have moved north to push colder, arctic airmasses further away.

Meteorologists have calculated the average temperature of February in Longyearbyen to be -1.2°C. The long-term average for February is -16.2°C.

It can be assumed that it is not only the air that is currently warmer than it used to be, but also the waters around Spitsbergen. The ice situation seems to confirm this, as large parts of the waters east and north of Spitsbergen are far more open than they usually are at this time of the year. Even inner branches of the fjords such as Tempelfjord and Billefjord have not yet really frozen over so far.

The current weather forecast for the next 10 days does at least not show any temperatures above freezing. While it was not far below zero in Longyearbyen over the weekend, temperatures at the east coast were said to be near -30°C.

Also in Norway, the winter has, so far, been far milder than it usually is.

Even the small Adventfjord has not really been frozen in several years by now. 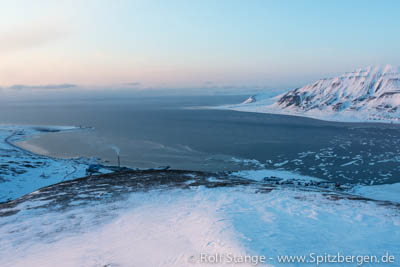