Most of my polar voyages in 2014 have already been fully booked for quite some time. If you still want to join in 2014, then you have got the possibility to do so in September, focussing on natural history, photography and hiking with SV Antigua. Click here for more info (German site, as the trip is German speaking).

Now I have also got most of the dates for 2015 fixed. Detailed information is yet to come, but as most voyages will, according to experience, be fully booked at an early stage, I do recommend to get in touch in case you are interested.

The following trips in Spitsbergen are planned for 2015 (they will be German speaking, so you should speak a bit if you want to join, but of course it does not have to be your first language):

Jan Mayen: our expeditions to Jan Mayen are fully booked more quickly than we can advertise them properly, which is quite amazing! This is the case both for 2014 and 2015, so if you are interested to spend a week on Jan Mayen, then we are now looking at 2016 and you should get in touch sooner rather than later.

We are also planning another trip into Scoresbysund (east Greenland) with SV Ópal, similar to 2013, so have a look at the photos (trip 1 and trip 2) to get an impression. The planning for another trip to East Greenland in 2015 is currently still in an earlier phase. 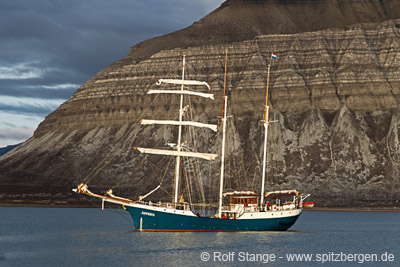