Oil spills in cold climate areas: are and remain uncontrollable

It is almost 25 years ago that the oil tanker Exxon Valdez hit a reef on the south coast of Alaska. The Exxon Valdez achieved sad fame when an alcoholic captain and an overcharged third mate steered the ship on rocks on March 24, 1989. 37,000 tons of crude oil were spilled and polluted 2,000 km of coastline. The result was and is an ecological and economical disaster for a whole region.

Scientists have now had 25 years to study the consequences of an oil spill in cold (but not high arctic) coastal waters. The results are sobering:

These are some of the key results presented by Professor Steiner in an article in the Huffington Post. On the long term, only abstinence of oil will prevent oil spills. This was one of the demands of the 1989 disaster in Alaska, but the global need for oil has obviously increased dramatically since. Sustainability is not yet a significant factor in decision making in politics and economy.

Small oil spill next to a leaking diesel tank at a station in Antarctica. 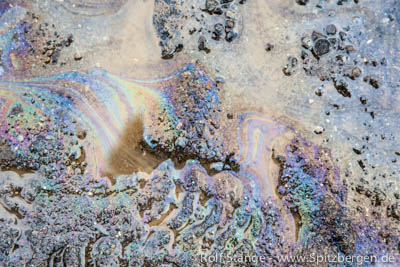