The russian nuclear submarine Krasnodar is on fire since Monday morning near Murmansk. Krasnodar is a Oscar II class boat, similar to the Kursk, and one of the last Russian submarines from the days of the Cold War to be taken out of service in 2012 for scrapping.

According to the website Barentsobserver, scrapping a nuclear submarine starts with removal of spent nuclear fuel. Next is removing the rubber cover of the outer hull. This seems to be a dangerous process, as fires of the outer rubber layer during removal have occurred before more than once. It seems as if the present fire is a similar case.

The removal of the nuclear reactors is the last step of scrapping a nuclear submarine. In other words, the 2 reactors are still on board, with considerable amounts of radioactive materials.

Krasnodar is in the Russian navy shipyard Nerpa north of Murmansk, only about 100 km from the Norwegian border. Despite an information exchange agreement, Norwegian authorities were informed by media about the fire before they got any information from official Russian sources. The Norwegian district governor describes a fire on a nuclear submarine as a serious issue.

According to Russian information, no radioactivity has escaped so far. 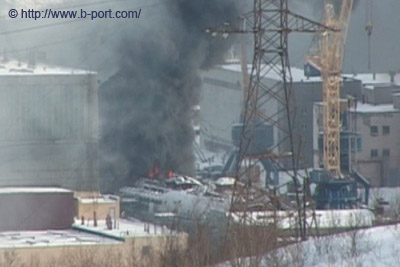 The snow mobile season has started a few weeks ago in Spitsbergen. Some locals start already during the polar night, while most others and most tourists start their snow mobile excursions when the light comes back around mid February. The season lasts as long as snow and ice make it possible to be out, usually into the first days of May or until mid-May if it works well.

Snow mobile excursions make it possible to see amazing places which are otherwise hard to reach, if not impossible for most, but they bear their specific risks. If you don’t know the local terrain and you do not have experience with snow mobiles, then it is definitely a good idea to join a guided group. This is also the official recommendation by the Sysselmannen (governor).

Some incidents of the last couple of weeks:

In another case, a person went unconscious and fell from his snow mobile at low speed in Grønfjord, south of Grøndalen. First aid was given, but his life could not be saved. The information available seems to indicate a heart attack or similar medical emergency.

The first two cases indicate that accidents can naturally also happen while on tour with guided groups. But at least locally knowledgeable guides will make sure adequate speed is being used, which is especially important in case of terrain obstacles such as steep slopes which can be very difficult to see. Adequate speed is of vital importance. Guided groups also have emergency equipment including satellite phones. The mobile phone cover in Spitsbergen is unreliable or, rather, inexistent over wide areas.

For safe tours with snow mobile and ski, the following are recommended or should be considered:

This list is not complete, but it includes some important points. 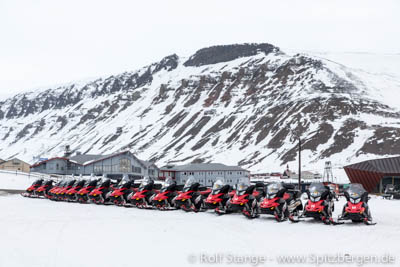 Source: Sysselmannen, Svalbardposten, my own experience.