Yesterday (Wednesday, 15 October) a polar bear visited Longyearbyen (see yesterday’s post here). The bear was finally driven away by the Sysselmannen (police), who followed it several kilometres by helicopter to make sure it would return directly.

But it did. Now, the polar bear is somewhere on the sea shore of Adventfjord adjacent to Adventdalen, close to Longyearbyen. Together with the Norwegian Polar Institute, the Sysselmannen is now preparing an attempt to sedate the polar bear and then fly out out to a remote location in the Spitsbergen archipelago.

The Sysselmannen asks everybody to stay away from there area until this has been done.

The polar bear is approximately in the area marked red near Longyearbyen. Image base: Google Earth. 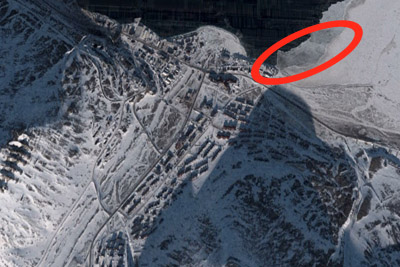