The data base is not sufficient to analyze reasons, but this season’s instable weather may have contributed with bad visibility at times and icy surfaces.

The proportions of locals and tourists is also not known. Several serious accidents included local drivers, such as the young man who died in an avalanche in January and the extensive search and rescue mission on the east coast. In late March, a young man from Longyearbyen fell into a 6 m deep snow whole with his snow mobile and received heavy head injuries. He is still in hospital in Tromsø, not in a life-threatening condition anymore but he his being kept in an artificial coma.

The numbers of participants on organized tours have not reached the levels of the record years of 2007 and 2008 again, but the numbers of individual snow mobile rentals have increased, indicating a larger number of tourists individually in the field. Those who are out on individual trips with limited experienced and without local knowledge have to remember that they are traveling with a strong vehicle that can quickly reach high speed in terrain that has all the potential traps and dangerous that the winter arctic may have. Uneven terrain, windholes in the snow etc. can be difficult to see in bad weather or poor light conditions, which may quickly result in dangerous accidents.

Enjoyable evening on tour with snow mobiles. But the weather is not always as nice as here. 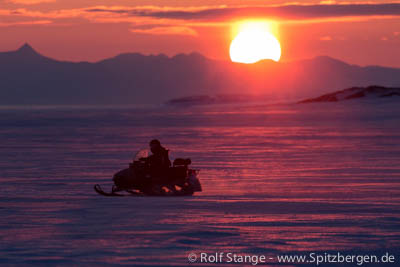