The lagoon in Mushamna is a piece of art by nature. A beautifully curved, narrow gravel bar is separating the lagoon from the fjord. The entrance is 10 metres deep and hardly much wider. Ideal to spend a sheltered night at anchor.

And to land in almost all kinds of weather. Today it is completely calm, not a problem anyway. Still a lot of snow, but the land is inviting to walk around and explore.

But the landing came to an end after already a few minutes. The place was already occupied. This polar bear, which appeared out of nowhere just a few hundred metres from us, it clearly had the right of way.

What followed was quite incredible. We spent most of the day on board Antigua inside the lagoon, moving just a few hundred metres here and there. The polar bear – a lady, equipped with a satellite sender from the Norwegian Polar Institute – walked around and then laid down on the ice. A second bear came along and went over the ice to the fjord one, scaring it to death so it ran away so the water was splashing on the rotten ice. 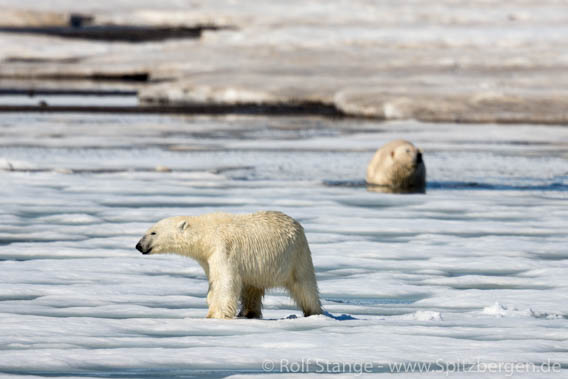 Later, a third bear came around the mountain in the south, an impressive male. He walked past bear number 2 on the ice of the lagoon, but they did not pay much attention to each other. Meanwhile, bear no 1 had disappeared to the south. Bears 2 and 3 walked here and there over the ice and along the shore, much to our great pleasure on board. So the sunny hours went quickly, one after the other.