While Europe is debating tougher border regimes, the Norwegian government has implemented stricter border controls on flights between Norway and Svalbard. Passport controls in Oslo or Tromsø have to be expected now, where ID cards had been sufficient so far for non-Norwegian Europeans.

Svalbard is under Norwegian sovereignty, but with limitations as defined by the Spitsbergen Treaty of 1920. Due to the treaty regulations, Svalbard is not treated as part of Norway by customs. Flights from Oslo to Longyearbyen start at the international part of the airport Oslo Gardermoen. Norway is part of the Schengen treaty area, Svalbard is not, and this means that you are crossing a Schengen boundary when traveling to or from Svalbard.

The recent tightening has probably little to do with the current debate about Schengen borders, refugees and security. It is more likely that the surprise visit of the Russian vice premier Rogosin in spring made the Norwegian government take these steps. If Norway would legally have been able to deny Rogosin access to Spitsbergen is controversial.

No check-in for flights to Longyearbyen without passport now. This applies also to moose. 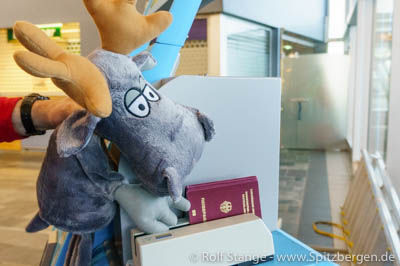