While I am talking about good old Antigua: right now, she is in the shipyard. Cut into two parts. No iceberg and now underwater rock are the reason for this, but the owner’s plan to make her a bit longer. Half of the cabins will be a bit larger from 2016. But there won’t be more cabins and no more beds than so far, so not more people than we are used to, and that is important. And they say that a longer hull is making for better sailing abilities. I am looking forward to a renewed Antigua in 2016! 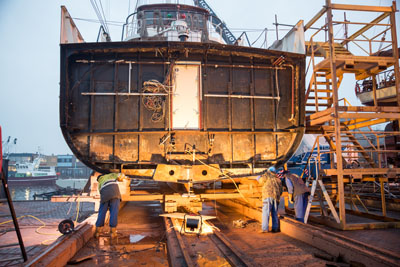 Meanwhile, the polar night has come over Svalbard. What should have been a peaceful and silent arctic winter brought disaster to Longyearbyen just before Christmas, when a snow avalanche went into a housing area, strongly damaging 11 buildings and killing two people. So the year 2015, which has brought war and terror to many countries, comes to a sad end also in Spitsbergen. Let’s hope that 2016 will bring as many great adventures as 2015, but less sad ones.

During the season of the short days, I am sorting the trips of the past, getting triplogs, videos and photo galleries ready, which I recommend to everybody who wants to leave their home or office mentally for a moment to take a virtual trip up north. New trips are being planned, with Antigua, with Arctica II, with Ópal (in 2017), with Aurora. To Spitsbergen, Greenland and Jan Mayen. A new focus on hiking, in early September. This all takes time for a lot of thinking and planning. 2015 has seen 166 news and blog entries on this website. Also new book projects are getting on. Several ones are in the making, some in a stag quite advanced. So I can promise new books, but I am not going to say anything about timing. I am not planning an airport, I am just writing books. Nobody is paying me for that. So I don’t have to promise anything and I don’t have to excuse anything in case it takes more time. That keeps life easy (kind of).

I wish all readers a good and happy new year! Great trips in high or low latitudes, health and happiness! Maybe our paths will cross, near the poles or somewhere in between. Under the midnight sun or the polar light.