Temperature in February 10 degrees above average

The winter is taking a break this year in the Arctic. It is well known by now that the global average temperature in February was well above the long-term (1950-1980) average, as much as 1.35 degrees according to NASA scientists. The temperature increase was especially pronounced in northern high latitudes: north America, Siberia, northern Scandinavia. In these regions, the mercury climbed 5-10 degrees higher than it does in average.

Recent data from Spitsbergen confirm very strong warming also from this area: in February 2016, the temperature was no less than 14.5 degrees above the long-term average, a drastic value! Still, February 2016 is not the race leader. February 2014 has got this doubtful honour, with a dramatic 14.5 degree temperature rise above average.

In Svalbard, the recent mild weather threatens to influence the ongoing winter season strongly: the fjords do not want to freeze, which is causing difficulties for arctic wildlife. For example, Ringed seals, who are giving birth on fjord ice in April and May. Without fjord ice, pregnant females are not able to deliver, meaning that this year’s reproductive season may fail for significant parts of the population. This will again influence polar bears, who are usually having a good and important time hunting on frozen fjords in spring. This is an important feeding season for many polar bears, including mother bears with youngsters born a few months before. Especially these families are strongly dependent on good hunting conditions in spring, after a fasting period of several months around birth for the mother.

Also local and other tourists are not happy about the mild weather. Last weekend, an incursion of warm air again brought temperatures above zero, making the snow thaw and melt in inland valleys that are part of popular snow mobile excursions. Locals have warned to take the popular trip to Barentsburg these days, as there was very little snow left in Colesdalen and Grøndalen. The melted snow is now turned into slippery ice, as temperatures are falling below -10°C again.

At least, the forecast promises temperatures to remain low for the near future, but it is not expected that fjords (Tempelfjord, Billefjord) still get a wide, strong fjord ice cover this season.

Open water in Tempelfjord at Fredheim. The last time this area was frozen solid was in spring 2013. 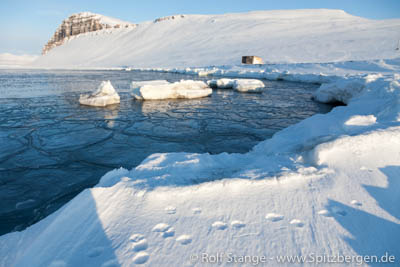