The case of the polar bear family shot in June at Austfjordneset has been matter of this blog in two previous articles (click here for the first one and here for the second one).

The verdict of the public prosecutor in Tromsø has now been published. The shooter has got a fine of 20,000.00 NOK (just above 2100 Euro) because of negligence (“uaktsomhet”). The man has accepted the fine, the verdict is accordingly in force.

There was no acute danger to human life during the situation, as the shooter was on the roof of the cabin and the second person inside.

Both trappers are back on Austfjordneset and will continue their wintering. A few days ago, another polar bear that could not be scared away from the station area had been tranquilized and flown out to Nordaustland by the authorities. 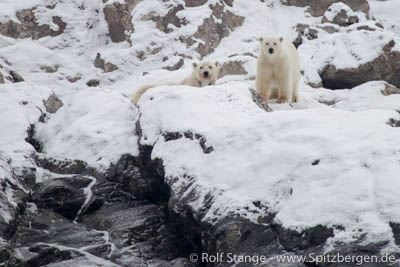