Less mercury in polar bears – due to climate change?

If sea ice is gradually withdrawing as a result of climate change, the level of mercury in polar bears could decrease. 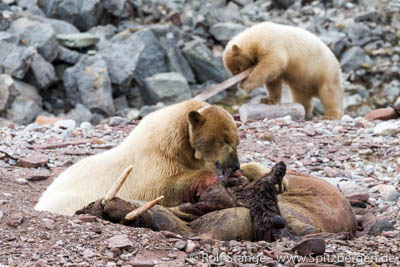 In an US-American study, hair samples of polar bears were investigated in the Beaufort Sea north of Alaska from 2004 to 2011. The result: In male animals, the levels of mercury declined by about 13% per year, but not in females. This is probably due to different foraging habits of the sexes. Female polar bears chase mainly ringed seals from the ice, which in turn feed on mercury-contaminated fish. Male polar bears also feed from land on bearded seals and stranded bowhead whales, which are only slightly contaminated with mercury.

If the ice in the polar regions is now more and more declining due to climate change, polar bears could increasingly shift their foraging habits to prey which can be found on land, e.g. stranded bowhead whales.

According to the study, the lower concentration of mercury in the polar bears is not a consequence of a reduced mercury concentration in the environment.