The next image from the Spitsbergen calendar 2018 is the month November. It shows a small group of Spitsbergen reindeer. These shed their antlers once every year. The exact time is different for males and females. It also varies individually, to some degree.

This small herd of reindeer shows all variations in their antlers: one does not have antlers at all, one dones only have one half and the third one has got the full set of antlers!

The photo shows reindeer in a winter environment at Diabasodden in Sassenfjord. In the early winter, reindeer have got their fat reserves, next to the meagre vegetation that is mostly hidden under snow. Later, when the fat reserves are used up and the tundra is still under snow and ice, the risk from starvation will increase strongly. 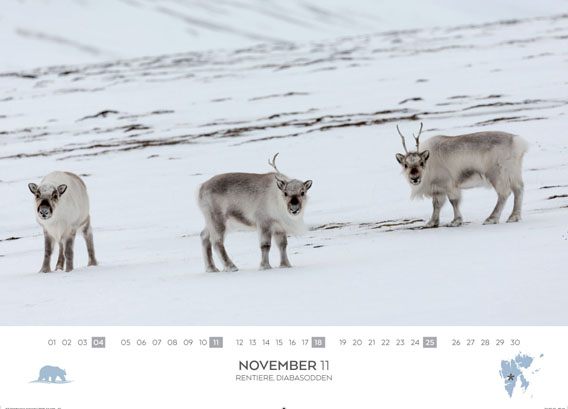 Spitsbergen-Calendar 2018: November. A group of Spitsbergen-reindeer with different variations of their antlers.

Longyearbyen cemetery may be moved because of avalanche risk

The cemetery of Longyearbyen has been in a calm part of the valley Longyeardalen for about a century, between the church and Huset, the old town meeting place. It is still an active cemetery, the last burials were in 2013 and there may be more in the future. Only urn burials are allowed, however.

The location of the cemetery is calm, but maybe not calm enough in the long term. The steep mountain slopes nearby have produced avalanches in recent years, mostly landslips after periods of rain, which have reached the terrain around the cemetery. In the last summer, even the road between the church and Huset was closed for prolonged periods. It is probably only a question of time until the cemetery itself is hit and badly damaged.

This is a scenario which Longyearbyen church with priest Leif Magne Helgesen are not willing to accept. Helgesen has taken initiative and started a debate which may lead to a relocation of the cemetery. It is a place of peace and dignity, for which many people have strong feelings, according to Helgesen. He reasons that it would accordingly be irresponsible to leave the cemetery in a place where it may suffer bad damage.

First meetings with authorities like the Sysselmannen, who is responsible for monument conservation, and the local adminstration have taken place. Authorities in Longyearbyen have experience with moving and securing graves from historical graves that are threatened by coastal erosion. Moving a whole cemetery would, however, be a project of an entirely different scale. Also relatives will have to be involved.

A new location would naturally be near the church, which is a quiet part of Longyearbyen and has areas that are not at risk from avalanches and landslides.

The cemetery in Longyearbyen may be moved due to the risk of landslides and avalanches. 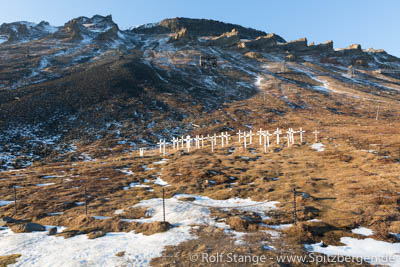