There is no certainty yet if the object that was located by echolot in a depth of 200-250 metres on the sea floor in Isfjord, not far from the Russian helicopter base at Heerodden close to Barentsburg, actually is the wreck of the helicopter. But there is no doubt that the MI-8 helicopter did crash into Isfjord yesterday. As more than 20 hours have gone by since the crash and there is no trace yet of any survivors, hopes to find any of the 8 people on board are getting smaller and smaller and the worst has to be feared.

Names of the 8 persons on board were already yesterday released by Russian media. Now, also the responsible Norwegian authority, the Rescue Centre North Norway, has released the names officially.

The persons on board the helicopter were

There is hope until the opposite is proven, and every effort is taken to continue the search and find survivors. Norwegian SAR forces are on location with helicopters, a special aeroplane from the Norwegian airforce, ships and boats. But the more time is going by, the more likely it seems that it is a tragedy without survivors.

The Sysselmannen has established a contact phone number for relatives and expresses deep sympathy with those who are affected. This is shared by the author of these lines, whose thoughts and sympathy are also with those who were in the helicopter and their family, friends and colleagues and all others who are involved.

According to international law, Norwegian authorities are responsible for the investigation of the accident. A havary commission is already in Longyearbyen and will soon start to gather all information that is available. But currently, the effort to find survivors and the helicopter are still the focus of all efforts. 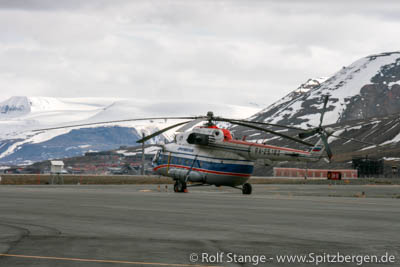