The wreck of the Russian helicopter that went missing on Thursday afternoon is now most likely found. A ROV (Remotely Operated Vehicle) of the Norwegian Navy has localized an object at a depth of 209 metres on the sea floor that appears to be the wreck of the MI-8 helicopter. The ROV named “Hugin” and another ROV of the research vessel Ossian Sars will continue to gather data to identify the object and to find the missing persons. There were 8 people in the helicopter when it crashed on Thursday. No traces of survivors could be found.

The position is 2.2 kilometres northeast of the Russian helicopter base at Heerodden close to Barentsburg.

A Russian aeroplane has brought divers and other specialists from Russia to Longyearbyen to take part in the operation under Norwegian leadership.

Diving roboter Hugin of the Norwegian navy searching after the crashed helicopter near Heerodden. 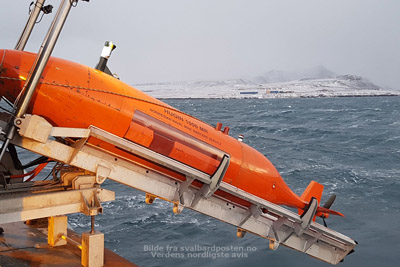