Gibostad welcomed us with a bit of a surprise: this nice, snow-covered, historical pier where we had gone alongside was close for traffic. Too old, not safe. So there was no evening walk.

But of course we wanted to have a look at the place, so we just use the zodiac to go ashore in a small boat harbour around the corner. A pittoresque little ville on the beautiful island of Senja, with an „old city“ at the small boat harbour. The „nostalgic bakery“ was closed, unfortunately 🙂 but that was not the point. The point was the beautiful landscape, the stunning light, the snow, all the lovely little details to discover. It was all there.

Also in Finnsnes, we took the opportunity to have a look around. A calm, small north Norwegian town. Not the centre of the world, but if that is what you are looking for, then north Norway is not your place anyway. But again, lovely evening colours (at 3 p.m.!) on the mountains, and a little, already frozen lake in a small forest in the middle of town.

The stunning evening light stayed with us until it gave way to twilight and then darkness. The sky remained clear, so we were of course curious what the evening might bring. The aurora forecast was not exactly optimistic, but so what, after all it was just a forecast! Reality is still a different thing. And indeed, later in the evening, there was a northern light! Faint, but clearly visible at times!

One body was found in a distance of 130 metres to the wreck. It is already in Longyearbyen. There is no hope that any of the 8 people in the helicopter, 5 crew and 3 scientists, survived.

The Norwegian authority for traffic disasters (Statens havarikommisjon for transport, SHT) is now in charge of further investigations. A salvage vessel is expected to arrive in Longyearbyen on Thursday. The uplifting operations will start as soon as the vessel is in position at the accident site. Russian specialists are in Longyearbyen to support the Norwegian forces under Norwegian leadership. When the wreck is lifted, it will be taken to the Norwegian mainland for further investigations. SHT is currently conducting interviews with witnesses and collecting various data including weather, the condition of the helicopter, qualification of the crew and more.

Photo by a dive roboter of the research vessel Ossian Sars used to identify the wreck (image © G.O. Sars). 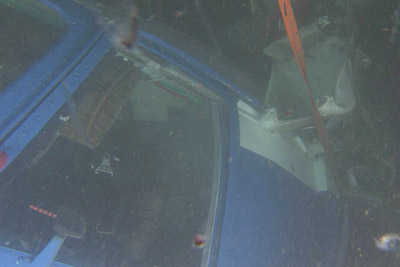