Back in Longyearbyen. Spitsbergen in mid-November may not be your place if you love sunshine. You have to appreciate the polar night to enjoy being here now. The last time the sun made it above the horizon was in late October, but today, November 14, the sun remains at least 4 degrees below the horizon even at noon. That is the beginning of the polar night, officially. There is some twilight around mid-day, so-called „nautical twilight“ for a couple of hours. Not even „civil twilight“, which most people would describe as „not completely dark“, but we don’t even have that anymore. There is not much to be seen of the moon either. It is going up in the middle of the night and down again in the afternoon, but it stays so low that you don’t really recognize that it is actually there.

Still, it is fully possible to have orientation while out on tour mid-day. The stars give some light, so that works well at least when there is snow. There is not much snow, but there is some, at least.

These photos give some impressions from a little hike during the „brightest“ hours. They are actually too bright, more so than in reality. No photography anymore without a tripod! It is still fun to be outside, but this is obviously not the time for very long trips out in the nature. You do a walk, and you get your work done in town, you spend time meeting friends …

There is, by the way, an info-page on this website dedicated to the polar night and midnight sun.

A new panorama on this site gives a 360 degree view of Ballstad on Vestvågøy, one of the Lofoten islands in north Norway. I shot it freehand and the weather was quite typical November.

Part of the new panorama of Ballstad (Lofoten). 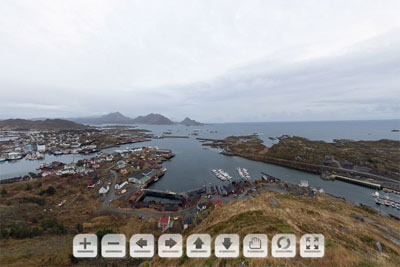