Considering the weather forecast, I had been rather optimistic regarding today’s visit to Bear Island, but less so when I saw how the wind and waves came from the southwest, rolling around the southern tip of the island and making the supposedly sheltered eastern side an uncomfortable place to be. So I was rather uncertain if we could make it ashore today. 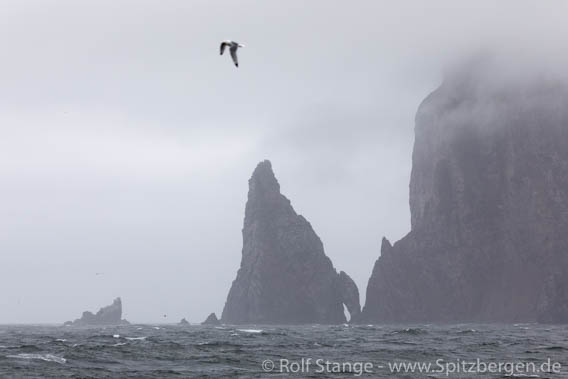 Which way to Bear Island, please?

Sørhamna was clearly not an option, and a quick look into the bays further north did not give us much in terms of useful options either. To get at least a bit of shelter, we ended up dropping the anchor in Røedvika close to Miseryfjellet. No chance to get ashore here, but anyway it was good to have Antigua reasonably calm for a while.

After having observed the wind and weather for a while, Mario, Sarah and I took a Zodiac to see if there was really no chance to get ashore anywhere. The wind seemed to have calmed down at least a bit. This is our 8th visit to Bear Island with SV Antigua, and we can’t possibly make this the first one without a landing? Of course it is up to mother nature in the end, but we wanted to give it a try at least … the key to success turned out to be that Mario took the Antigua close to the coast in a drift position where islets and rocks took most of the power out of the swell, so we could board the Zodiacs safely and go ashore on a lovely beach which itself was perfectly calm. Heia Bear Island! This area, on the southeastern coast of the island, is amongst the most beautiful spots. A small, but good impression of the beauty of the nature on this remote island which is still rather rarely visited, being off the usual tourist trails.

It was with a big smile that everybody got back later on board. In the evening, we set course for Spitsbergen. 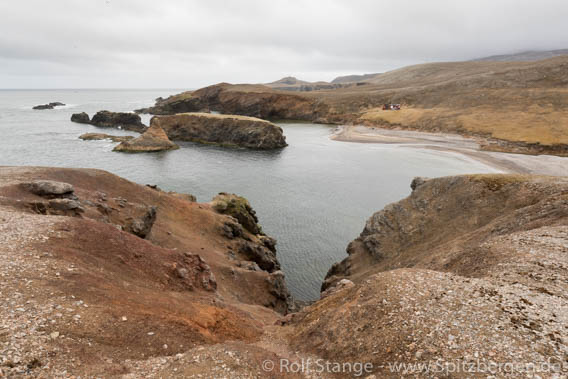 Made it! View over Bear Island