Evacuations in Longyearbyen due to avalanche risk

It has almost become a painful tradition: the evacuation of dwelling houses in Longyearbyen at times of avalanche risk. The white danger was brought back into public attention very abruptbly in December 2015 when a snow avalanche from the mountain Sukkertoppen destroyed a number of houses and killed two people. Further houses were destroyed during another avalanche in February 2017; this time, it was only a matter of luck that nobody was hurt.

Since then, measures are taken to prevent further accidents, including rather drastic ones. Avalanche protection constructions have been established on the slopes of Sukkertoppen. The destroyed houses were not repaired. On the contrary, nearby houses are now regularly evacuated at times of avalanche risk. Depending on the risk at each individual address, some houses are only evacuated when there is an acute risk, while others are closed during the whole avalanche season.

On Thursday (29 November), an avalanche warning was issued on varsom based on weather forecasts that predicted a lot of snow. Consequently, the Sysselmannen reacted by issuing evacuations for a number of houses. 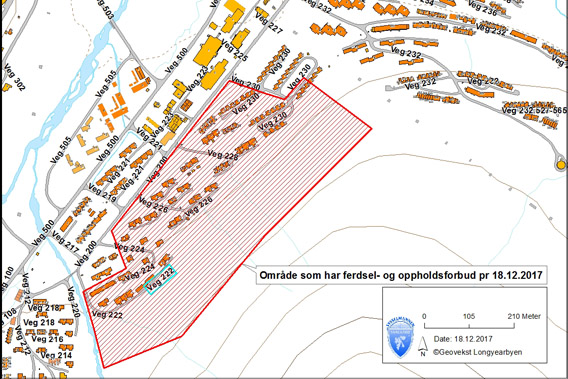 Evacuation map of December 2017. The houses closed last Thursday were within the same area.

Some evacuations have already been lifted based on a new avalanche risk evaluation by NVE, the Norwegian authority responsible for managing avalanche risks (who release warnings on varsom.no). Others will be kept up during the whole avalanche season. Visit the Sysselmannen’s website for information on which addresses are concerned.

It is up to those concerned to find new accommodation – not an easy task considering the difficult housing market in Longyearbyen.