Temperature in Longyearbyen since 100 months above average

Climate in Longyearbyen warmer than average since 100 months

February and March 2019 have mostly been cold months with temperatures around -20 degrees centigrade and below over many periods, but it has not been enough to reach the monthly average. Also in March, the average temperature of the months was above the long-term average. This was the 100th month in a row that the temperature (average of the month) was above the long-term average – more than 8 years, in other words, as climate scientist Kjetil Isaksen reports to Svalbardposten.

The reference period for the long-term average is 1960-1990. The normal temperature from this period is history: climate change is three times faster in Spitsbergen than in mainland Norway and six times faster than globally. According to Isaksen, this is largely due to increased water temperatures in the fjords and surrounding seas: there is more heat exchange between sea and atmosphere than before and the decreased ice cover enables the water to absorb sun radiation and turn it into heat rather than reflecting a higher proportion back into space as previously.

Avalanche barriers as an adaptation to climate change in Longyearbyen

Scientists do not expect this trend to stop at any time soon. In Longyearbyen, the community is adapting to a new climate. 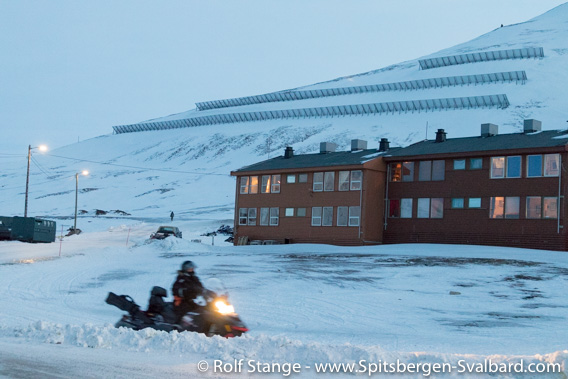 After the catastrophic avalanche from 19 December 2015 which has claimed two lives, hundreds of inhabitants are evacuated every year during the avalanche season, many of them for several months. Plans are currently made to tear down buildings with 142 flats in areas which are at risk from avalanches. Housing shortage and an overheated housing market are challenges that many locals in Longyearbyen currently have to deal with.

Also in Barentsburg people are aware of these developments and an avalanche risk map has recently been published. Some buildings are in areas at risk and would not be built now where they are today. But it is assumed that the situation can be controlled technically, without moving or tearing down buildings.