The summer is currently going calmy in Spitsbergen, mostly. Which is a good thing. The heat wave that seems to numb large parts of central Europe these days is not much of an issue in Spitsbergen. It is warm up there as well, around 10 degrees centigrade, and up 13 degrees are expected for tomorrow (Sunday) according to the Norwegian forecast on yr.no – pleasant temperatures, if you ask me. Certainly warm summer days in the Arctic, but not a record-breaking heatwave.

There is an ongoing debate in Longyearbyen about cruise ship traffic and tourists. There are days when several thousands of them are flooding the place, which has about 2500 inhabitants. No surprise that this is controversial.

People are also discussing when the champagne glass might break. This is a pretty conspicuous snow-field that you can see on Operafjellet, east of Longyearbyen. It has the shape of a champagne glass. When the snow-melt has advanced far enough, then the stem will “break”. Once this is the case, then it is summer in Longyearbyen, according to an old tradition. There is an annual competition arranged by Svalbardposten, the local newspaper, where you can have your guess when exactly the stem will break. This is usually the case in late July. 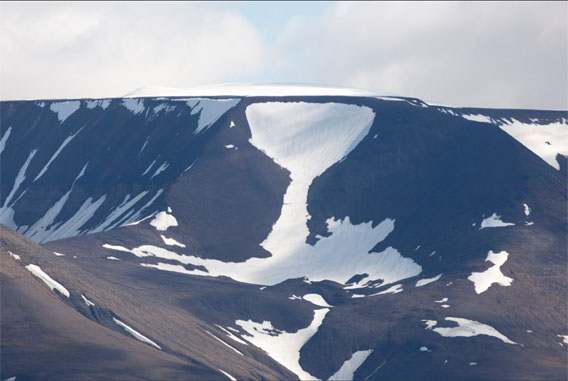 The “champagne glass” on Operafjellet east of Longyearbyen.

The first local initiative to arrange a pride parade in Longyearbyen is largely met with enthusiasm, but there are also some critical voices on the usual social media platforms, including some hate comments. Well, why should people in the Arctic generally be any better than elsewhere in the world.

Nature lovers amongst locals and tourists are currently enjoying many encounters with whales in Isfjord and elsewhere, including blue whales, fin whales, humpback whales and white whales (belugas). And there are some rare visitors to the Longyearbyen area. Currently, there is a group of ruddy shelduck, which according to Wikipedia have their “main breeding area … from southeast Europe across central Asia to Lake Baikal, Mongolia, and western China”. This does obviously not include Spitsbergen, so the ruddy shelducks that are regularly seen these days between Bjørndalen and Adventdalen have lost track. It is, as far as we know, the second time that this species is observed in Spitsbergen. And it is not the only recent rare bird sighting. There has been that tundra swan in Adventdalen and a tufted puffin on Bjørnøya. According to experts, this increase of rarity observations indicates an increased density of observers out in the field rather than any changes in the natural world. This is a good thing – we are out there in nature and we are learning while being there.

This leaves some time to get other things done as well. The Spitsbergen panorama selection has received some new entrants: 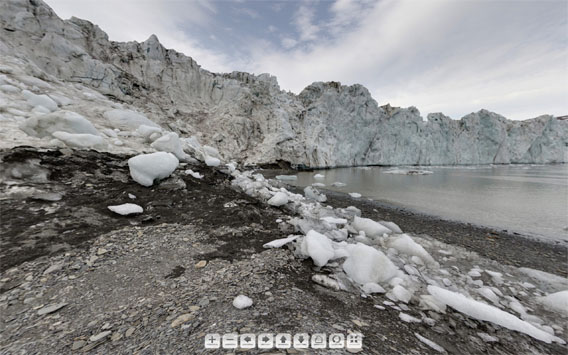 Markhambreen: a rarely visited glacier on the east coast of Spitsbergen. One of several new entries in the Spitsbergen panorama collection on this website.

And: several new pages are now online displaying selections of photos illustrating a long and exciting recent voyage on SV Antigua. Click here to join us under sail in the Arctic!