Fine for disturbance of polar bears in Tempelfjord

A man from Longyearbyen got a fine of 15,000.00 kroner (ca. 1500 Euro) because he disturbed polar bears during a private snow mobile tour in Tempelfjord in 10 March, 2018. He is said to have approached the bear with the snow mobile to a distance of 70 metres so the bears were visibly disturbed and moved away.

The incident was seen by witnesses who were out on tour on the neighbouring mountain Fjordnibba. The man was soon stopped by field police. A second man who was also involved could not be identified.

Because of the increase of snow mobile traffic, the Sysselmannen has announced to take strong action in such cases to make it clear beyond any doubt that the protection of the wildlife is of highest priority. In the current case, the fine has been imposed by the state advocate in north Norway, as revealed by the Sysselmannen.

The case caused some debate in social networks in Longyearbyen. Only a few days later the fjord ice in Tempelfjord, until then a popular destination both for locals and tourists, was closed for most motorised traffic. 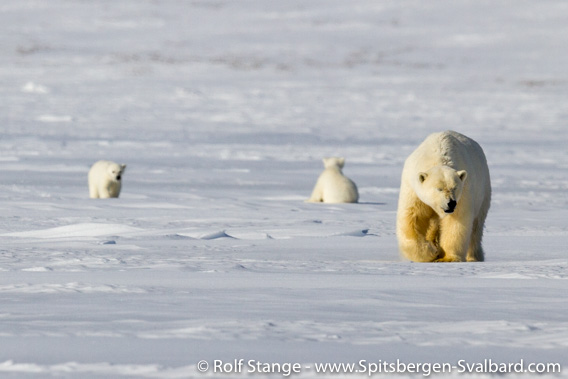 Polar bears in Tempelfjord (or elsewhere, for that matter): any disturbance is strictly forbidden.

According to the Spitsbergen environmental law (Svalbardmiljølov kapittel IV § 30) “it is forbidden to attract, to follow or seek out by any active act, polar bears so these could be disturbed or there may be danger for humans or polar bears (original text: Det er forbudt å lokke til seg, forfølge eller ved annen aktiv handling oppsøke isbjørn slik at den blir forstyrret eller det kan oppstå fare for mennesker eller isbjørn.)