The new year starts with sad news: the polar bear that had been seen several times close to and within Longyearbyen was shot on New Year’s Day at 04 a.m. by police forces (Sysselmannen).

Just after midnight, the bear had been seen in Adventdalen close to the settlement after it had disappeared in Bjørndalen in bad weather on Saturday. It seems as if the Sysselmannen initially managed to scare it away from Longyearbyen last night. 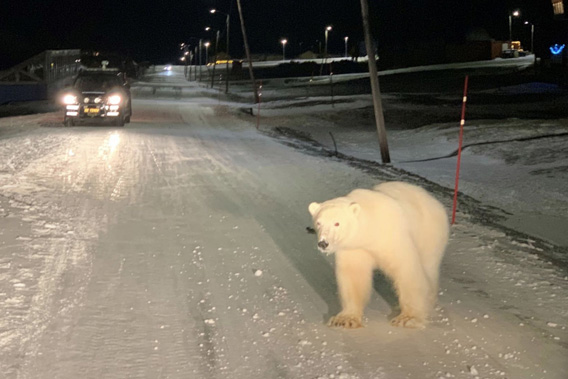 The bear was shot in Hanaskogdalen, on the north side of Adventdalen, at 04 a.m. According to a press release by the Sysselmannen, the bear was not shot in a acute situation. The behaviour of the bear, which had been seen four times close to or even within the settlement area, had been considered and the official conclusion was that authorities were not able to guarantee public safety with the available forces anymore.

The option to tranquilize the bear and to aenesthetise the bear to fly it out to somewhere more remote had also been considered, but discarded due to the lack of absense of specialists who were not in Longyearbyen at that time due to the Christmas holidays.