Outdoor folks who want to get out near Longyearbyen can not yet return back to normal (whatever that means in Spitsbergen anyway). The polar bear that gave a group of tourists and guides with dog sledges a good adrenalin rush on Wednesday was seen again yesterday (Thursday) afternoon.

On Wednesday, the bear was pushed up Bolterdalen and into Tverrdalen by the Sysselmannen’s helicopter. The hope was that it would, after a rest, continue southwards. But the bear obviously had different ideas and returned to Bolterdalen, where it was met Thursday afternoon on Scott Turnerbreen (-glacier) by Tommy Jordbrudal and his colleague. Tommy has been running a small company offering dog sledge trips in that area for many years and was out to check the conditions on the glacier, which is a popular destination for dog sledge excursions. Scott Turnerbreen has an accessible ice cave and the area is largely snow-mobile free: only locals are allowed to drive there with snow mobiles and even for them Bolterdalen and a wide area around it are off limits for motorised traffic from 01 March every year, meaning that locals and tourists can enjoy a silent area for silent excursions by ski or dog sledge.

But polar bears are not banned from the area, so Tommy and his colleage suddenly had a polar bear just a few metres away from them, investigating their snow mobile. Even a warning shot with a revolver did not make much of an impression on the bear. 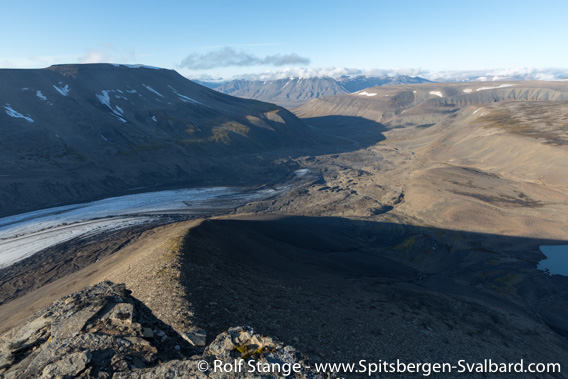 Bolterdalen (seen from Soleietoppen): currently not a polar-bear-free area.
Scott Turnerbreen on the left hand side.

Tommy has been running trips in Bolterdalen for 12 years now, so during the season he and his guides are there on a very regularly basis and he says that he has never seen a polar bear track or even a bear there before. Now the Sysselmannen went out again by helicopter, trying to sort the situation out.

This author hopes that he does not have to write again about incidents where life, human or animal, came to any harm.