A first report has been published that sheds some light on the tragic avalanche accident that happened on 20 February on Fridtjovbreen. The report is written by a group of people from the Arctic Safety Centre at UNIS, the avalanche group of the local Red Cross and local avalanche observers of the Norwegian avalanche warning system, varsom.no; it was published on varsom.no. It is not a report by the Sysselmannen or other legal or governmental authority and it does not include a legal assessment. The point of the report is to understand the accident and to draw conclusions to improve safety out in the field.

On 20 February, a group of 7, including two guides from the Russian Arctic Travel Company Grumant, left Barentsburg, heading for the glacier front of Fridtjovbreen, south of Barentsburg in Van Mijenfjord. The group made a stop at the southeastern slope of Marcussenfjellet on the higher part of Fridtovbreen to visit a meltwater cave. The cave is very close to the steep slope of Marcussenfjellet and a terrain depression between the cave and the mountain was used to park the snow mobiles. The first three snow mobiles had already stopped when the avalanche went down. Two persons were completely covered by the snow masses and two others partly. The three remaining persons were not caught by the avalanche.

The volume of the avalanche is estimated to have been near 10,000 cubic metres, the collapsed snow area on the slope was 13,000 square metres. 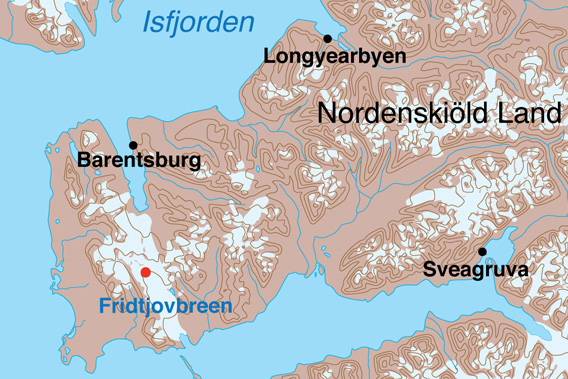 The approximate accident site is marked with the red dot.
Map base © Norwegian Polar Institute.
Modified by landkarten-erstellung.de and this author.

The two persons who were completely under snow died. According to an official press release (Sysselmannen), the two victims were Sascha Brandt (39) and Magdalena Katarina Zakrzewski (40), both from Germany.

One of the two victims was covered by half a metre of snow. This person was dug out after 20 minutes. The other one was under two metres of snow. In this case, it took one hour. The guides and other group members used avalanche probes and snow shovels to recover the victims.

The group did not have any avalanche transceivers/avalanche beacons.

Alarming the rescue forces took time because the satellite phone that the group was equipped with was on one of the snow mobiles that were covered with snow (there is no mobile phone coverage in this area). Finally, the second guide could use an InReach to send a message to Barentsburg, from where the Sysselmannen in Longyearbyen was informed. The rescue helicopter could not land on location due to poor weather. It took two hours from the emergency call and until the rescue forces arrived. The doctor who came as part of the rescue team could only declare the two victims dead. 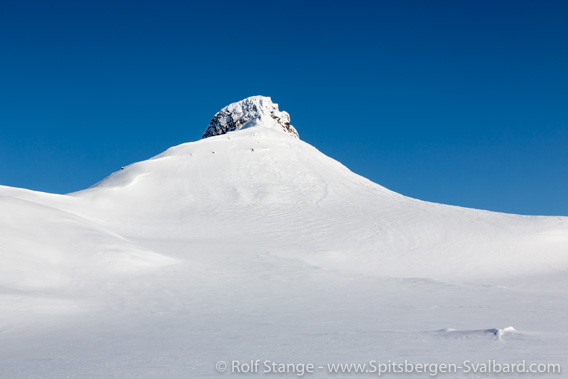 Snowfall, wind and fluctuating temperatures during the weeks before the accident had contributed to the general avalanche risk: several layers of firn with poor bonding capabilities were under a layer of fresh, wind-blown snow. The Norwegian avalanche warning service (varsom.no, link above) had issued a level 2 warning (moderate risk; the highest level is 4).

One of the conclusions of the reports is that the presence of the group, with the impact of the snow mobiles on the snow, had triggered the avalanche.

As general recommendations, the report points out that all members of a snow mobile group should have avalanche equipment (specifically avalanche transceivers/beacons, snow shovel, avalanche probe) and everybody should be trained in the use of the equipment. Ideally, this should also be the case for tours in easy, open terrain, where avalanche-prone slopes can be kept at a safe distance, according to the report. But it is especially important for tours in complex terrain, closer to avalanche-prone slopes. The terrain of the tour from Barentsburg to the front of Fridtjovbreen is generally easy and in open terrain, but things are different for the deviation from the common route to the ice cave close to Marcussenfjellet.

As mentioned: the report in question is an evaluation of the incident by avalanche experts with local knowledge and not a legal assessment. This will be made by Norwegian authorities and it is currently still in process and not yet published.