Again, there is a polar bear in Adventdalen, not far from Longyearbyen. It was seen for the first time on Sunday near Operafjellet by a group of hikers; the Sysselmannen decided to pick up the group by helicopter to be on the safe side. 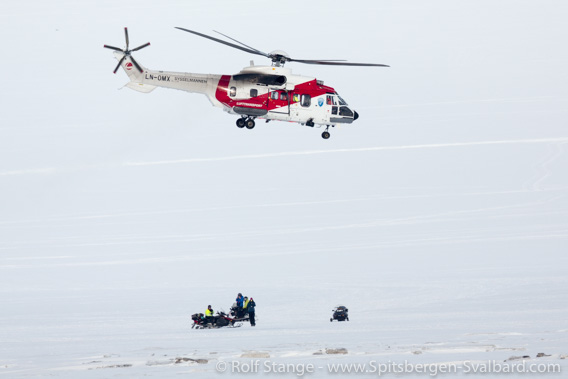 Polar bear in Adventdalen: a helicopter is used to remove an anaesthetised bear from the area (archive image).

It is said that the polar bear in question is a large male, possibly the same animal that was in the Adventfjord area in september. Attempts to scare it away with a helicopter did not make much of an impression on the bear. As of Wednesday, the polar bear was still in Adventdalen, where he was so far staying within a limited area. So far, the Sysselmannen has no plans to anaesthetise the bear and to fly it out. It is assumed that the bear will just continue with his ever-lasting search for food and move on sooner or later.

The public is asked to be aware and alert.