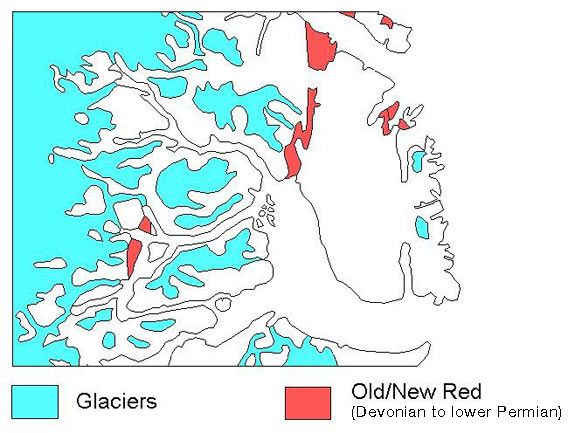 The erosion of the Caledonian mountains started as soon as it was uplifted about 400 million years ago. Rockfalls and rivers kept wearing the mountains down slowly and turned them into hills and finally into lowlands.

Parts of the crust in the vicinity of the eroding mountain chain were subsiding along fractures: so-called ‘grabens’ developed. The surface subsided several kilometres during many million years. Here, the debris from the erosion of the mountains collected. This happened in several phases between about 360 and 250 million years ago, during the Palaeozoic, more precisely in the Devonian, Carboniferous and Permian.

The whole area was not too far from the equator during those times. The climate was rather warm and not too dry, so chemical weathering could produce a certain iron oxide called hematite, which has a nice, reddish-brown colour. Large volumes of the sandstones and conglomerates (sand mixed with pebbles) which were deposited in the grabens have accordingly a very nice reddish colour. As these sediments are old and red, they are usually referred to as the ‘Old Red’. The younger part from the upper Carboniferous and Permian is sometimes called ‘New Red’ to distinguish them from each other, although they are quite similar. 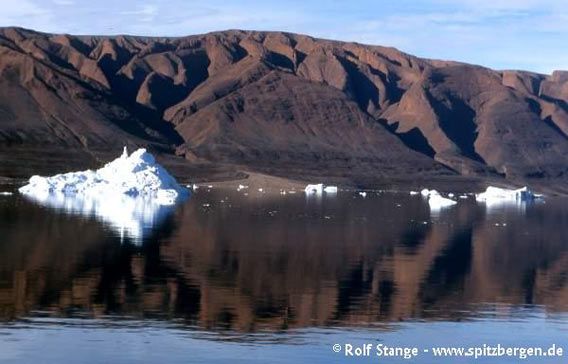 New Red on the western side of the Rødefjord

Uplift brought both Old Red and New Red to the surface. There is no Old Red in the Scoresbysund area (but further north), but we can see the New Red between the Stauning Alper and northern Jameson Land and on the western side of the Rødefjord in the inner Scoresbysund fjord system. Here, the landscape has a strikingly beautiful, reddish colour and the slopes have rather soft shapes, dissected by steep canyons. Compared to the surrounding, older gneisses and granites, the New Red is relatively soft. The Rødefjord even owes its name to the red sediments.

In places,fossils have been found, which are well preserved and have achieved some fame in scientific circles, as they document some of the oldest creatures which made the transition from water to land. These finds have been made north of the Scoresbysund.