In contrast to the other geological units, the cause for and the effect of the ice age is limited to the surface and it is not linked to tectonic processes – at least regionally. Neither did it leave huge rockmasses, compared to other chapters of Earth history. But it shaped Greenlands landscape to an extent which makes it fair to say that it created Greenland and its unique character and beauty. More important than the sediments which have been and, in places, still are deposited by glaciers, rivers etc., may be the strong effect of erosion which shaped the landscape so dramatically. In Greenland, the ice age is not over yet: it is still 85% covered with ice. 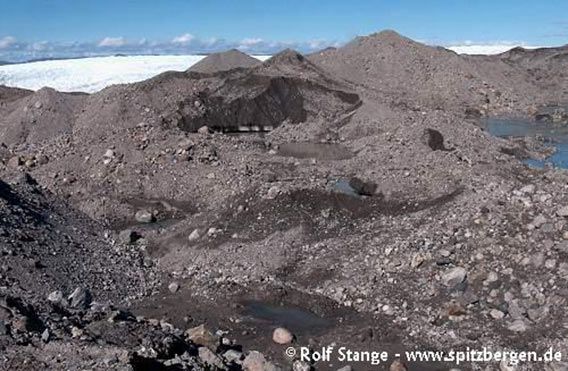 Moraine at the rim of the inland ice (Kangerlussuaq, West Greenland)

The onset of glaciatíon in Greenland may have started about 7-8 million years ago. The inland ice has existed since then probably without interruption, but certainly with some fluctuation regarding volume and extent. The history of these fluctuations is, for most of it, not known in any detail, as the glaciers tend to delete their own traces. But certainly Greenland has been completely ice-covered beyond its present-day coastline at multiple times, at about 130 000 years ago for the last time. Jameson Land soon became ice-free since then and has at least partly remained so until today, which has been important for the survival of several plant species in the area.

The last glaciation peak was about 15-10 000 years ago, with glaciers reaching far beyond their present limits. Most land areas in the Scoresbysund were ice covered beyond today’s coastline, only the wide, middle part of the fjord (Hall Bredning) and its entrance south Liverpool Land have been ice free, together with southern and western Jameson Land. Since then, the glaciers have retreated, with some fluctuations, until they reached today’s position. A last phase of general advance was around 1850 during the ‘little ice age’, since then the glaciers are retreating, as they do currently almost everywhere on Earth. This becomes obvious from large, fresh moraines near almost all glaciers. 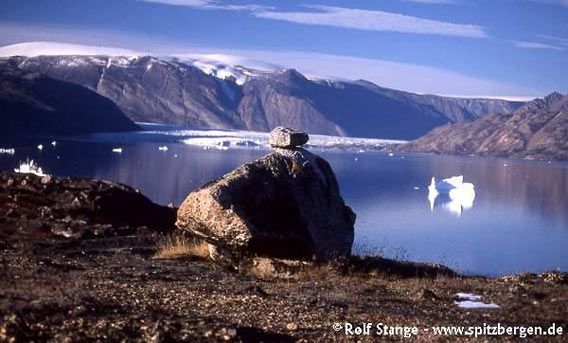 Much more important for the recent appareance of the Scoresbysund has been the intense erosion of the ice-age glaciers. It was this erosion which has created the largest fjord system in the world (rivers may have made a start before the onset of the ice age, though). In its inner branches, depths of more than 1000 metres are common and reach up to 1400 metres in places! To both sides of the fjords, rockwalls higher than 1000 metres and mountains reaching beyond 2000 metres are towering. The spectacular altitude differences, which are so evident in the dramatic mountain and fjord scenery of the inner Scoresbysund and – on a somewhat smaller scale – in Liverpool Land, is a result of strong land uplift during the opening of the Atlantic ocean and subsequent glacier erosion. 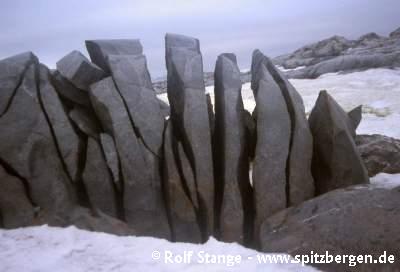