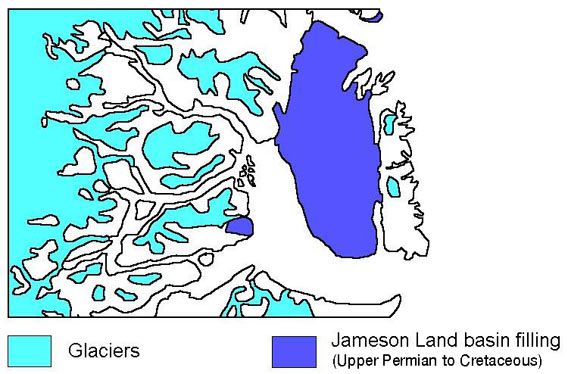 Finally, the graben systems of the Old Red and New Red area had stopped subsiding, and it was quite calm for a while. But soon, other, large areas began to subside slowly. This time, subsidence occured not along distinct fault lines, but more as a wide-spanned bending of the crust, so the result is called a ‘basin’ rather than a ‘graben’. The sediments deposited in these basins can be found in the whole of Jameson Land as well as in southeastern Milne Land. 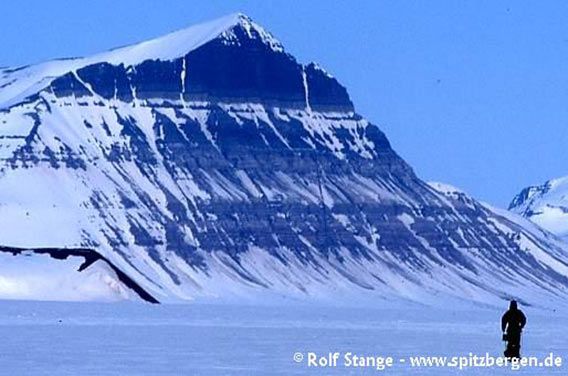 Soon, shallow sea started to fill these basins. This sea was not extremely deep, a few hundred metres maximum or even less, so the coastline was not far away. They even fell completely dry at times. Basin formation started in the youngest part of the Palaeozoic, the upper Permian, a bit more than 250 million years ago. As a start, wide, low-lying plains formed with desert-like landscapes, where occasional floods left sand and gravel. First ingressions of the sea left limestone and, due to subsequent evaporation of seawater which was not replaced, gypsym. There are also some dark, fine-grained marine sediments. The dark colour is due to a high content of organic matter, which drew the attention of the oil- and gas industry to the respective areas in Liverpool Land and Milne Land, but spectacular finds have not been published.

During further development, the sea advanced and retreated once again, leaving marine siltstone (as sandstone, but with somewhat finer grains) covered by dune sands and deposits of salt lakes, including layers of gypsym.

Finally, the sea advanced again and stayed for a long time. From now on, a quite narrow but long basin in East Greenland, stretching from the Scoresbysund area or even a bit further south far to the north, remained filled with seawater for more than 100 million years.

Typical sediments were deposited in these relatively shallow seas, mostly sandstone and claystone (as sandstone deposited as single grains, which later stuck together and thus formed a hard rock mass, but with invisibly small sediment grains). Also the inhabitants of those seas left their traces. At some locations, we can find large amounts of fossils such as ammonites, shells etc. Especially the ammonites are so abundant in some layers and so well preserved, that changes in their physiology during the course of evolution are visible. This enables geologists to establish a detailed chronology of geological events and the history of life in the area. The resolution in time is almost razor-blade sharp, at least in geological terms: a single stratigraphic unit often cover just one million years! The ammonite zone is 150-200 million years old (Jurassic). 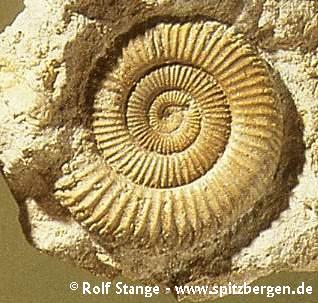 Uplift and subsidence of different parts of the basin led to changes of water depths. When the sea became very shallow, the coast came near and coastal sediments were deposited: sandy beach deposits, but delta sediments were often dominant: large volumes of sand deposited by rivers at the coast. These deltas were sometimes quite rich in vegetation, as is the Mississippi Delta today. Sometimes, the vegetation got buried under a new layer of sand. Then, it could subsequently be turned into coal after a long time. There are indeed several coal seams in Jameson Land and at other places further north, but of inferiour quality and quantity. It has been used locally, though, for example at Kap Hope near Ittoqqortoormiit (Scoresbysund), where a small area of sediments has survived erosion at the southwestern corner of Liverpool Land.

The deposition of sediments in the basin lasted throughout most of the Mesozoic into the lower Cretaceous, about 100 million years ago. It probably lasted even longer, at least into the upper Cretaceous (up to 65 million years ago) or even beyond that. In the Scoresbysund, all sediments younger than lower Cretaceous, should they have existed, have been removed again by erosion. There are some very small areas of Tertiary sediments south of the Scoresbysund, at Kap Brewster and Kap Dalton at the outer coast.

Finally, basin subsidence ended, and so did subsequently this chapter of Earth history in East Greenland.

The sediments which slowly filled the basin can now be found everywhere in Jameson Land and at the southeastern corner of Milne Land. The horizontal layering is mostly very obvious, for example when you arrive at the little airport of Constable Point. Some of the harder layers have been dissected by erosion in such a way that they form very nice, regular towers, which can remind one of a fortress or a Gothic church. 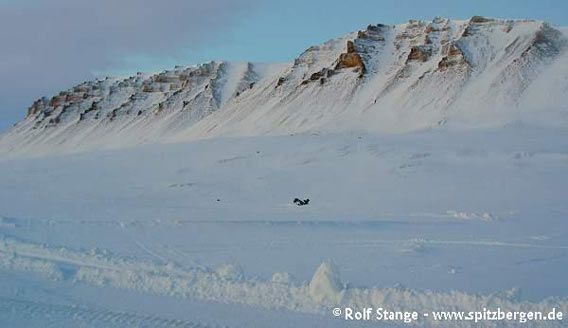 The basin sediments are mostly comparatively soft, at least compared to the gneisses and granites of the Precambrian Shield and the Caledonian fold belt. Accordingly, there are no high, pointed mountains, but rather open, relatively low hills which are often topped by markant plateaus, following the horizontal layers. 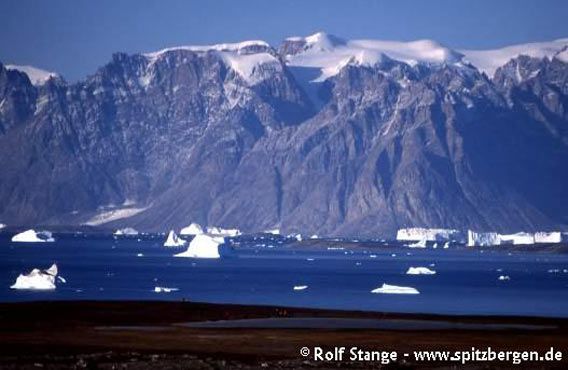 Contrast between flat tundra in western Jameson Land and mountaineous Milne Land in the background.