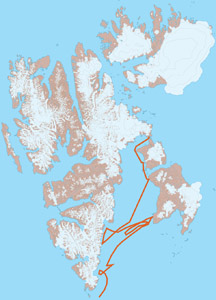 The southeast gave us a warm welcome, with beautiful light and calm weather, giving us fine opportunities to enjoy the colours of the tundra which were now about to switch to autumn-mode. We also managed a very nice landing on Edgeøya although the wind was already picking up again.

Then it became interesting (again!). Actually we thought the long trip to the south cape and then to the west coast would mostly be a matter of making all those miles, but things were not as expected. There was much more ice in southern Storfjord than indicated, which was not great in combination with the stiff northerly wind that we were now having. This kept us busy for quite a while, and we even retreated to southwestern Edgeøya for a day to anchor in a sheltered bay to enjoy the nature there.

After more criss-crossing along the ice edge, the Hurtigruten ship Fram came along, so we could then follow this strong ship, thus easily crossing the ice belt and even enjoying a nice polar bear sighting as we were through it before then making the passage around Sørkapp and to the west.