Røde Ø („Red Island“) is situated in Rødefjord („Red Bay“), inner Scoresbysund, and both names are storytelling, giving hints about the theme of the day: colours. Colours are one of the big things in Greenland anyway, from the intense yellow and green of the autumn tundra to the shining white blue of the omnipresent ice, the intense blue of the sky, the dark orange-purple of an arctic sunset and finally the mystic green of the aurora borealis. A jawdropping range of colours of immense beauty.

You can see all of it in Rødefjord and even more, as part of the fjord, including Rødeø, consist of sandstone an intense brownish red colour, the so-called New Red. This additional colour spectacle goes back to desert sand of the Permian, near 300 million years ago, when the eroded remnants of the Caledonian mountains where deposited on either side of the mountain range in tectonic depressions. It is both geologically and visually very similar to the Old Red which is well known from parts of Scotland (Orkney Islands) and Spitsbergen (Woodfjord, Dickson Land, to name some important examples). The New Red is just a bit younger than the Devonian Old Red. Well, it takes a while to wear a chain of mountains down. And today, spending a nice arctic summer day in a New Red area in east Greenland such as Rødefjord or in an Old Red area in Spitsbergen is one of the most scenic experiences the arctic has to offer. You will agree if you have seen it, I am sure!

And of course there is still this huge amount of large icebergs which keep stranding in „shallow“ waters on the northern side of Rødeø. A zodiac cruise between those icebergs is an immensely impressive experience (but be careful, otherwise it can also be immensely dangerous).

Rødeø itself has some impressive scenic features, such as a short cave under a sandstone arc on its southern coast, which is navigable for Zodiacs. A short distance west of it, there is a rock stack composed of basalt columns, an instrusive sheet weathered out of the softer sandstone, known as „brændestabelen“ (pile of firewood), an appropriately descriptive name. And from the hills of Rødeø, you have a beautiful view over one of east Greenland’s most scenic fjord. 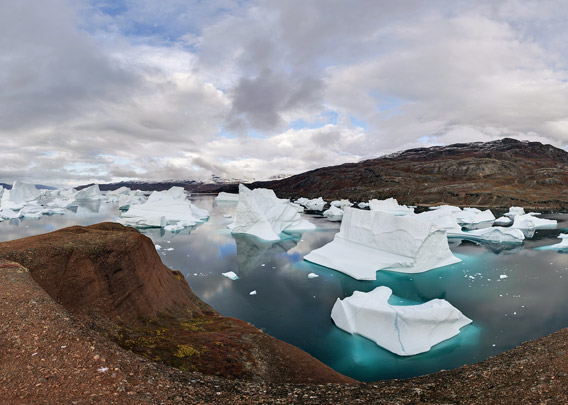