Barentsburg is a Russian coal mining settlement in Grønfjord, about 37 kilometres westsouthwest of Longyearbyen as the Fulmar flies. The mining history goes back to 1912, when a Norwegian company to the area, which was then no man’s land, into possession. They left a guard to keep a watchful eye on the place in case a competitor would come along. The guard was Knut Emil Glad from Finland. He brought his wife Anna Josefine for the winter in a small hut in Gladdalen, just above the centre of Barentsburg today. On 09 May, 1913, she gave birth to a boy. They called him Charles Emil Polar Glad and as far as we know, he is the very first person born in Spitsbergen – the first real Svalbardian, as they would say today!

In 1916, the Norwegians made the first attempts at least for some trial mining, but did not really get anywhere with it as they did not have the capital for mining on an industrial scale. So they sold their property in 1920 to a Dutch company, the Nederlandsche Spitsbergen Compagnie (NeSpiCo). The Dutch founded Barentsburg and named the place after Willem Barentsz, one of their polar sea heroes. They mined coal on a larger scale, but mining has always been an economical challenge in Spitsbergen and they finally had to sell. The new owner was a Russian company, which was soon turned into the state-owned Trust Arktikugol. This is the owner which still owns and runs Barentsburg and the other Russian properties in Spitsbergen today.

The Russians continued mining in Barentsburg in the 1930s, but the Second World War put a serious stopper. Together with the other settlements, Barentsburg was evacuated in 1941. In 1943, it was largely destroyed during a major attack by the German battleships Scharnhorst and Tirpitz together with smaller ships. Soon after this attack, the Norwegians established a garrison in Barentsburg in Operation Fritham, which also suffered losses from German attacks.

Only the old canteen, the big building to your left as you are on top of the stairs from the harbour, is in its core pre-1939. All other buildings that you see in Barentsburg today were built later. There was a quick rebuilding period after the war to ensure coal supplies to the industry on the Kola Peninsula in northern Russia. Most of today’s buildings were actually built during the 1970s and 1980s. In those years, the Soviet Union was powerful and ambitious and a strong presence in Spitsbergen was obviously something that the leaders in Moscow appreciated.

As the economy went down in Russia in the 1990s after the breakup of the Sovjet Union, Moscow forgot about her periphery and things went downhill. A strong blow for the Russian community in Spitsbergen came in 1996 with the crash of an airplane at Operafjellet. The second Russian settlement in Spitsbergen, Pyramiden, was abandoned in 1998. Barentsburg continued its existance, but under difficult conditions for some years. The buildings suffered from the climate, slope movements and lack of maintainance and the number of inhabitants dropped from once more than 1000 to a few hundred. Mining had to be discontinued after accidents between 2008 an 2010. Finally, the Trust Arktikugol started again to invest in Barentsburg. Some of the old buildings were removed and others were refurbished. Many examples of the old, Sovjet working-class propaganda disappeared, but some were kept, including the Lenin statue, one of Barentsburg’s most popular photo objects. 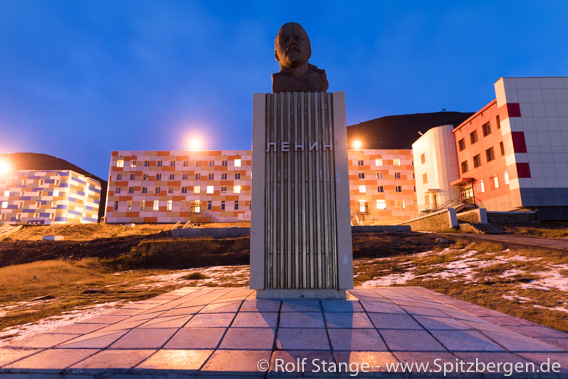 Coal continues to be mined, but quantities are small in a global context with about 100,000 tons per years. To secure income and jobs, it was decided to develop tourism. The hotel was modernised and activities are now offered to tourists who spend more time than just the 2 hours that those have who come on a day trip from Longyerabyen. Now, you can visit the coal mine, take a course in Russian handicraft or join a guide for a hike. The Russian Grumant Arctic Travel Company has announced to develop their products further in the future and we can be curious what kind of offers they will have!

Without any doubts, the combination of an active Russian mining settlement and the arctic surroundings makes Barentsburg a unique place, which has got much more to offer than what you can see in the 2 hours that you have got within a day trip from Longyarbyen. So far, most people take a trip of 8-10 hours from and to Longyearbyen, be it by snow mobile (mainly late March to early May) or by boat (April-early November). But if you spend more time, then there is definitely a lot to discover!