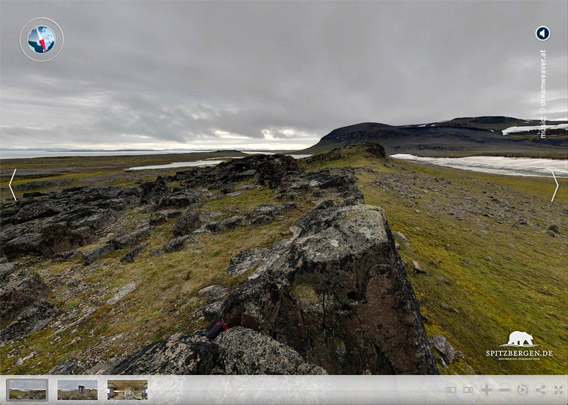 Sundneset is a tundra-lowland with some rocky hills at the southwestern corner of Barentsøya, stretching into Freemansund. From the hills, you have a lovely scenic view over the tundra around you with its lakes, where flocks of geese and some Red-throated divers are slowly swimming their loops in safety from Arctic foxes. Freemansund is separating Barentsøya from Edgeøya, the north coast of which is lying completely there with its characteristic table-shaped mountains. Reindeer are roaming around in large numbers, building up their fat reserves for the winter by constantly feeding on the rich vegetation.

The southwestern part of Barentsøya was a key area for scientific work of the German Stauferland-Expeditions between 1959 and 1967, led by the Geographer Julius Büdel from Würzburg in south Germany. Different aspects of natural history were investigated, with a clear focus on geomorphology, the science of the landforms of the Earth’s surface, their development through changing climates and the processes involved: the evolution of the arctic landscape. Büdel’s idea was to do this in an area with a climate similar to what he believed it would have been like in central Europe during the ice age and with a geological structure similar to southwestern Germany, where he wanted to understand the evolution of the landscape during the ice age. As a result, Büdel constructed his theory of „excessive valley formation“ in cold climate zones. Later generations of geographers expressed strong critizism about Büdel’s theories and his approaches.

At their time, the Stauferland expeditions were amongst the largest scientific operations ever in Spitsbergen.

A simple, small hut served as a base for Julius Büdel’s Stauferland expeditions. The hut reminds of a typical trappers hut, but a wintering in the badly isolated building would have been rather uncomfortable. The hut is small and does not offer space for more than approximately 4 persons, which does not reflect the rather large scale of the Stauferland expeditions. The number of involved scientists and other staff was much larger, the expedition had a ship and helicopters at their disposal.

Büdel called the hut Würzburger Hütte, after his home university in south Germany.