Who knows Emil’janovbreen? … exactly! 🙂 This is a glacier on the east coast of Spitsbergen, on the south side of the bay Kvalvågen. According to the map, there was a very small bay there – a very typical situation in times of climate change and retreating glaciers: the glacier is retreating and the end moraine remains as an isolated wall wherever it had been formed by the glacier. If this happened under water, then it may remain as a series of shallows, which may still be more than deep enough for ships or they may actually be dangerously shallow. Or, if the moraine is higher, then it may form a peninsula. This is also what happened further south, at Crollbreen, where we found a very interesting landscape setting on another occasion. 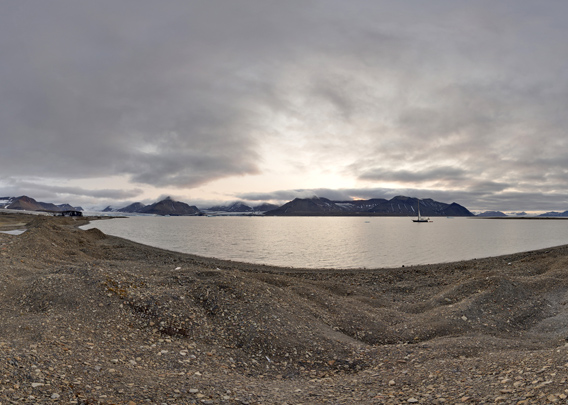 We had been hoping for a sheltered anchorage behind such a peninsula as we were entering this young fjord created by the retreat of Emil’janovbreen with SY Arctica II. The fjord is obviously uncharted, as it is really very young, geologically, just a few decades or even years, in the innermost parts. The glacier had actually retreated so far that we had plenty of space to anchor safely, and the peninsula turned out to be a fine area for a little walk.

Next morning, we continued across Kvalvågen to Boltodden. This is the place with the dinosaur footprints. Click here (Boltodden) to have a look around there.