Some history and 360 degree panoramas

Finneset, a small headland a few kilometres south of Barentsburg on the east side of Grønfjord, is a place that receives little attention these days, but it was one of the main centres of civilisation and infrastructure for some busy years during the early 20th century. The location is strategically chosen: it is not as far away from the open sea as, for example, Longyearbyen, but it is well sheltered and a useful natural harbour, with shores on both sides that are easily accessible. The headland itself is flat and provides plenty of space for a couple of buildings and some infrastructure. 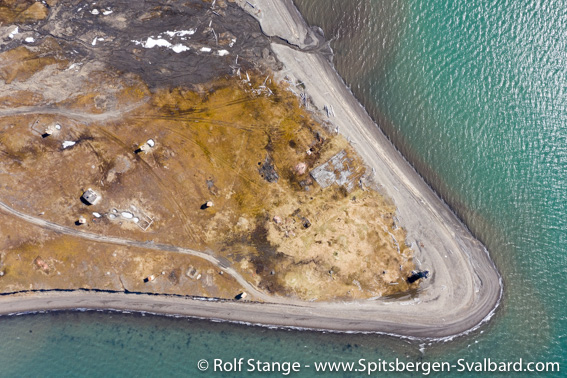 Finneset. Aerial photo from June 2019. On the southern beach (upper right), remains of the whaling station are visible, mainly the flensing platform. The radio station was further to the left, closer to the northern beach (bottom side beach).

For these reasons, Norwegian whalers called this little headland Finneset (“Fine cape”) in 1904. 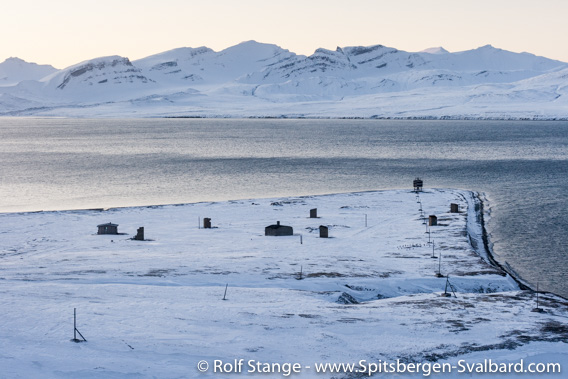 Finneset, October 2008.
The small hut to the far left was probably a Russian leisure hut.

The whaling company A/S Spitsbergen from Tønsberg in Norway established a shore station for whaling in Finneset in 1905. It was one two such stations in the Spitsbergen archipelago in the early 20th century. The second one was located in Kvalrossbukta on Bear Island (Bjørnøya). In those years, whaling saw another zenith based on recent technological innovations including steam-powered ships and explosive harpoons shot from powerful guns on the ships. This was all in strong contrast to the rather primitive methods of 17th century whaling, which were based on rowing boats and hand-thrown harpoons. With the new methods, whalers could go after the larger, faster baleen whales including the fin whale and blue whale. 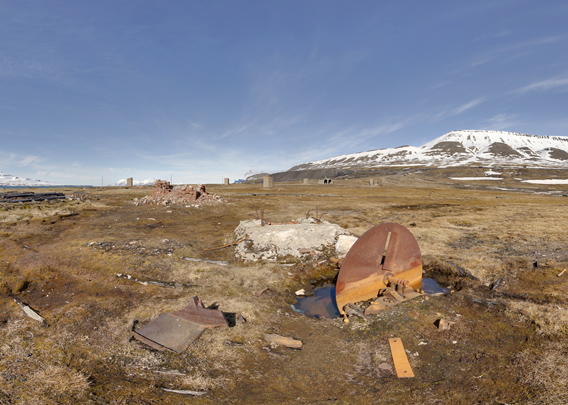 This old iron thing, which reminds of the cutter of a huge kitchen machine, was part of the technology that belonged to the flensing platform. Maybe it was part of the winch that was used to haul whales up?

The point with the whaling station was to cut the whale into pieces small enough to boil them to retrieve the oil, which was the main product as already in the 17th century. But now it was used not just mainly as lamp oil, but as an important raw material in the chemical industry, to produce anything from margarine through fine lubrication oil to explosives. Yes, at times whales were killed to produce bombs! Totally disgusting. 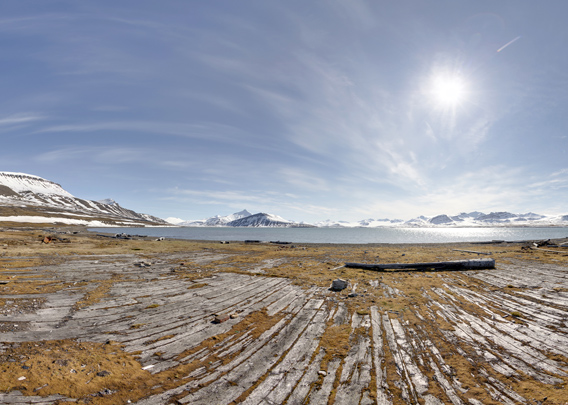 Back to the remains of the whaling station at Finneset. The flensing plattform was a central part of the installations. Here, the whale was hauled up onto this wooden platform with a strong winch to be cut up (“flensed”). The platform is still basically intact after a good 100 years.

There was of course a number of buildings, including simple accommodation for the workers and more up-scale housing for the manager and others, as well as storage and workshops. This old postcard indicates that Finneset almost looked like a little settlement at times! 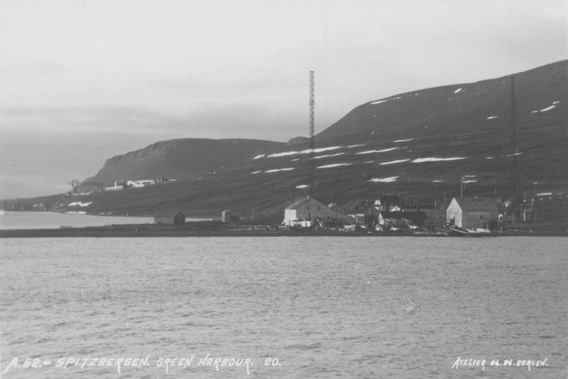 Finneset, old postcard. Barentsburg is visible in the background. The knowledgeable Leif Trønnes has suggested that this photo was taken between 1925 and 1932. Then, the whaling station was already abandoned again, but the buildings and installations were still there.

And indeed, up to several dozen men worked at the whaling station, and additionally, from 1911 there was a radio station on Finneset, just a few metres further north, on the other side. 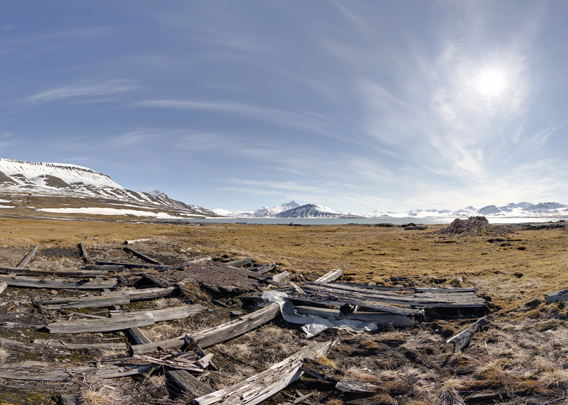 Here we have got remains of some buildings that belonged to the whaling station. Only the foundations remain. The whaling station was already in 1912. Some of the materials may have been moved to Barentsburg. Parts of the vital infrastructure were destroyed during the evacuation 1943, during the second world war, to make sure the Germans could not put them into use.

In 1911, Norway built a radio station called Spitsbergen Radio on the northern side of Finneset, in the immediate vicinity of the whaling station. Spitsbergen Radio made it possible, for the first time, to communicate directly from Spitsbergen to the mainland – and vice versa – without expensive, time-consuming ship traffic to relay messages. Political considerations were certainly an important part in the the Norwegian government’s motivation to build the station: Spitsbergen was still no man’s land, the Spitsbergen Treaty would not be signed before 1920, and 10 years before that, nobody could know how the sovereignty over the islands would be organised. It was just clear that someone had to take the task. In 1906, an American company had successfully established a coal mining settlement in Advent Bay (now Adventfjord) called Longyear City – now Longyearbyen – and the British Northern Exploration Company had secured rights to exploit mineral resources in large areas, such as Marble Island (now Ny London on Blomstrandhalvøya). Norway was clearly lagging behind, and they had to do something about it if they were to have a word in the negotiations regarding future sovereignty over the archipelago. Mail and telegraph were a matter of sovereignty and public interest, so there was an opportunity to be grabbed which would at the same time provide some real value to everybody who had some business in Spitsbergen. Soon the radio station became a busy place as many wished to operate their communications between their mining places and the outside world through Spitsbergen Radio on Finneset, which thus quickly became a very central place. 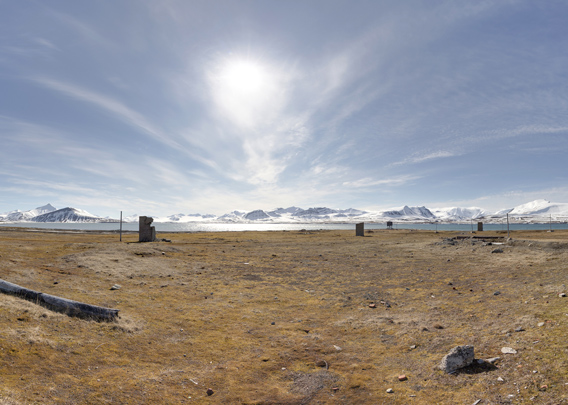 Also the radio station had a number of buildings, but also here, none is still existing. Only scarce remains such as the foundations remain to be seen. There are, however, a few exceptions. The main eyecatcher is this slightly weird building, which used to the the fuel storage, a very solid construction of concrete.

Two large antennas were needed to provide reliable radio communication with mainland Norway. The antennas are long gone – it is said that one was still lying on the ground on Finneset in the mid 1990s. It would then have been protected by law as part of Svalbard’s cultural heritage, but it is said that the remains fell victim to a Russian clean-up action. 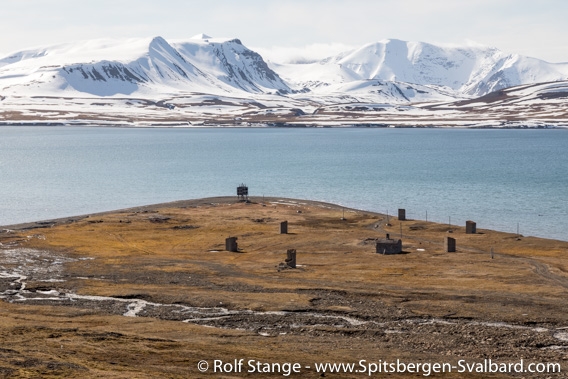 Finneset in June 2019. The Russian hut that can be seen in the photo above is gone. The fuel storage building and the foundations for the antenna anchorings can still be seen. 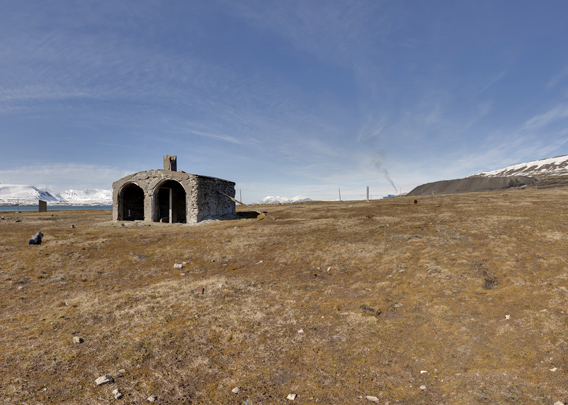 Here we stand on the foundations of one of the two antennas.

Both antennas had each three solid anchorings and each of them had a large concrete foundation. Three of them can be seen all in an equal distance from our viewpoint in the above panorama. 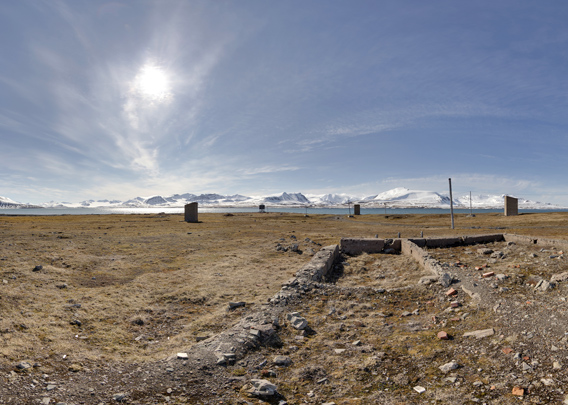 Here, we are standing in the middle of the old, small “settlement”. In this place, not far from the fuel storage, there must have been a large, solid building, but I do not know what exactly it would have been. The foundations of the antenna anchorings are also visible from here.

Spitsbergen Radio was at Finneset until 1930, when it was moved to Kapp Linné on the west coast. The new location provided a better radio connection to the south, as there were no mountains that way, and an increased distance to the new Russian neighbours in Barentsburg may also have been welcome. The Norwegian whaling station had already been abandoned years ago, in 1912.

And, finally, a selection of “normal” photos from Finneset: