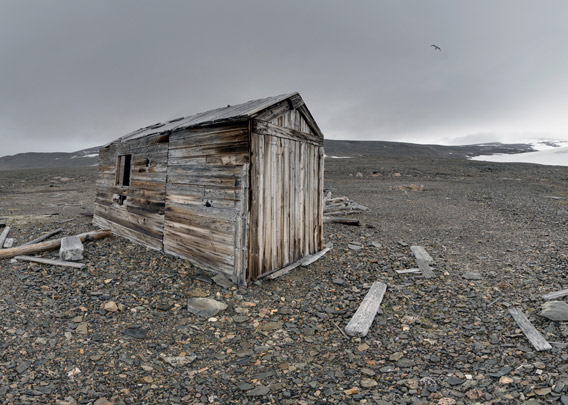 Goosbukta is a small bay in innermost Brennevinsfjord („Brandy Bay“) on Nordaustland. Considering the strong glaciation of Nordaustland, there is surprisingly much ice-free land between the inland ice and the coast. The land is at least in parts more or less flat, but very barren. It appears to be almost free of life, but just because of that and the vicinity of the ice cap Vestfonna, it is a fascinating place! 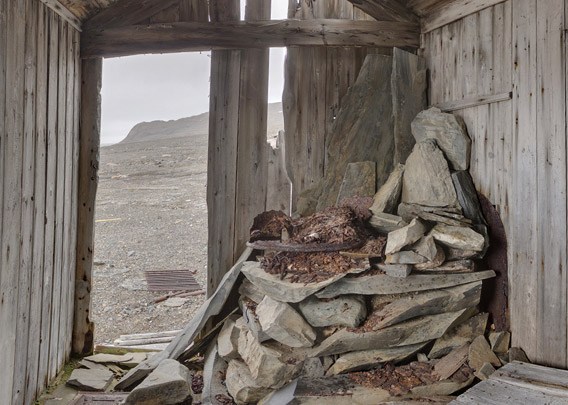 There is a little hut close to the shore. It was built in 1929 by the Norwegian trapper Karl Bengtssen and his men and it was enlarged in 1933. There were not many winterings in this remote area. The busiest winter was probably in 1935-36, when a British expedition from Oxford wintered in Brennesvinsfjord. The scientists led by Sandy A. Glen wanted to work on the ice cap Vestfonna. Following the logistics designed by Alfred Wegener for his 1930 Greenland expedition, they had a main wintering base at Depotodden on the coast further north in Brennevinsfjord and a smaller station on Vestfonna. Bengtssen’s hut in Goosbukta served as a convenient link between these two stations, as the rim of the ice cap is just a few hundred metres away from it and the glacier is easily accessible in this position.