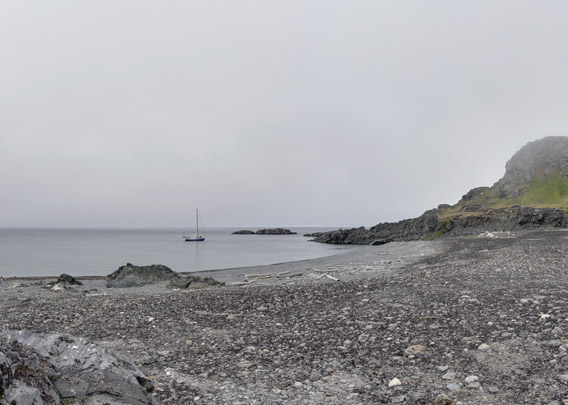 The end of the world and beyond! It does not get much remoter, certainly not in Svalbard. Karl XII-øya is a small, narrow, slightly longish island on the northeastern rim of Svalbard, well beyond 80 degrees north. Most of the island is made up of an elongated, low-lying rocky hill, which is partly covered with gravel. Only on the northern end, there is the hill Drabanten. With a height of 105 metres you can’t really call it a mountain but it is the highest thing anywhere here. Its steep slopes are home to a seabird colony, mostly kittiwakes. Of course it is quite common for polar bears to hang out under the bird cliff, waiting for the occasional egg or chick to fall out of the nest, at least as long the island is not surrounded by ice. So when the area is ice-free, it is quite common to find a polar bear on the island. And if there is ice around it, you don’t get ashore anyway. Landings on Karl XII-øya are, in other words, a rare opportunity!

Karl XII-øya has sometimes been described as one island in history and on other occasions as two islands separated from each other by a narrow, shallow channel. When I photographed this panorama, in August 2016, it was clearly two separate islands – the channel was definitely too deep to be crossed with rubber boots, and then it qualifies as two islands, if you ask me 🙂