Lilliehöökbreen as a virtual panoramic tour 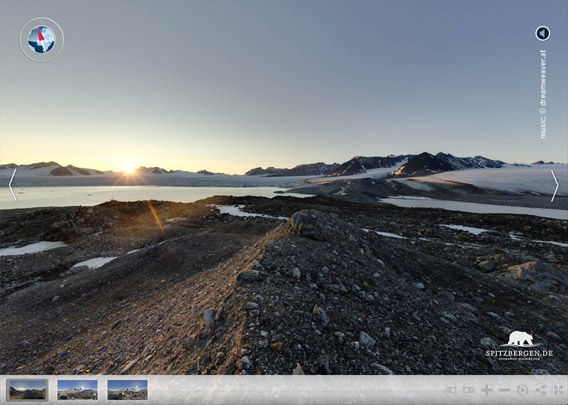 Lilliehöökbreen (-glacier) is one of the largest glaciers of northwestern Spitsbergen. The impressive glacier front is an unbelievable 11 kilometres long (approximately, as of 2013). It has retreated strongly during the last century, as has been documented by Duke Albert I. of Monaco during his 1906 expedition in comparison to a 2006 visit of his grandgrandson Duke Albert II. The volume loss during this time is estimated at 40 %. Since 2006, the speed of the retreat has even increased.

The moraine landscape south of the eastern side of Lilliehöökbreen, which is probably named after a 19th century Swedish scientist, is witness of the grand dimensions it must have had less than 200 years ago. This panorama was taken on a moraine hill during a midnight outing in late August 2014.

Lilliehöökbreen is actually not an individual glacier, but a complex of more than 10 glaciers that unite to form one large, moving mass of ice. If you followed the main branch inland, you would ascend slowly for almost 20 kilometres and then reach an ice plateau, which is the ice divide between Krossfjord and Raudfjord on the north coast. From this ice divide, Raudfjordbreen is flowing for about 14 northwards before it terminates in Raudfjord, 35 kilometres north of Krossfjord.

Our glacier crossing in August 2014 was not meant to go that far, we went from the east side of Lilliehöökbreen to Möllerfjord further east. After ascending the eastern slope of Lilliehöökbreen, we reached a large medial moraine that separates Lilliehöökbreen from Supanbreen. I took the second and the third of these panoramas on this moraine ridge. We continued the tour to Lloyds Hotel in Möllerfjord in the most beautiful summer weather you can imagine.