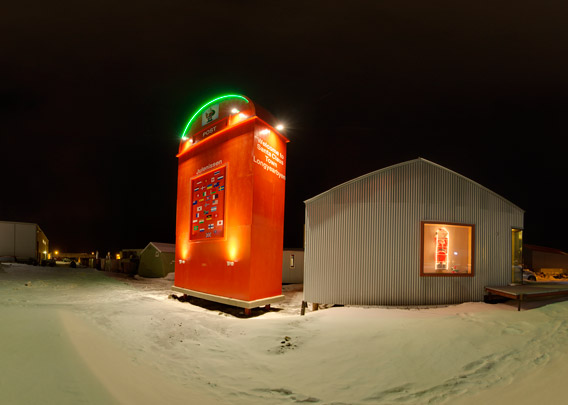 The giant Santa Claus mailbox was built in December 2013 by Po Lin Lee from Honkong, to highlight Longyearbyen as Santa Claus town. Passion for a special place or a clever business move? The huge mailbox is, anyway, controversial: for the official post, it is too similar to a real letter box, and not everybody in Longyearbyen thinks their home town is appropriately described as Santa Claus town. In 2015, the temporary approval for setting up the letter box ran ut, and the administration said they never got the complete papers for a new application, so it should have been removed. Problems at 78 degrees north!

Update November 2017 (I): the local administration (Longyearbyen Lokalstyre, LL) has decided that the Santa Claus letter box will be demolished on Monday, November 20. The costs, NOK 129,000 (currently 13,300 Euro), are to be carried by the owner, Po Lin Lee. Obvously a matter of even more quarrel! LL says that Po Lin Lee had plenty of time to find another solution, such as selling the letterbox, applying for further permits and so on. According to Po Lin Lee, however, she had tried to negotiate with LL (through lawyers) without success and claims that she had been treated unfairly (there is a storage building nearby that has been there for years without permission).

Update November 2017 (II): The deadline set by the local administration ran out on Monday (November 20). One day before that, a company started to take the letterbox down on behalf of the owner, trying to keep it intact so it can be built up again later on another site. According to Po Lin Lee, there are several interested parties outside Svalbard. The option to put the letterbox up again somewhere else in Longyearbyen is also still on the table, according to the owner.