The small islet Sigridholmen belongs to the group of Lovénøyane, a collection of little islets, all of which are smaller than a kilometre in diametre. Juttaholmen is another one of the islands in this group. Sigridholmen is just 700 metres across from one end to the other.

All islands of the Lovénøyane are very green. Birds including common eider ducks, geese and arctic terns, to name just some of the most common ones, have been breeding here in numbers for thousands of years, thus fertilising the tundra. Today, the Lovénøyane are protected as bird reserves: it is not allowed to go ashore from 15 May to 15 September, and you even have to keep a distance of 300 metres to the nearest part of the shore during that period. Strict, but it makes a lot of sense as the density of breeding birds is really high and it would be impossible to move around without disturbing birds.

The problem is that the polar bears don’t know that. They come to Kongsfjord and raid may nests of tundra breeders in increasing frequency in recent years. 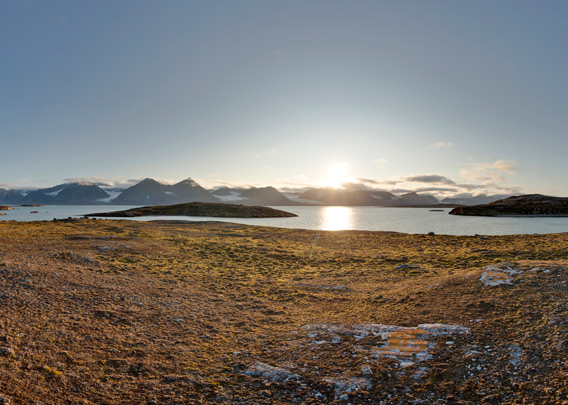 There has not been much in terms of human history on Sigridholmen, but the scenery is stunning. It is both the surrounding mountain and glacier panorama of Kongsfjord and the beauty of the island itself, which lies often in small details: the rich tundra, lichens on the many erratic boulders, the beautifully curved coastline. All this together makes Sigridholmen and her neighbours a treasure chest of arctic nature. 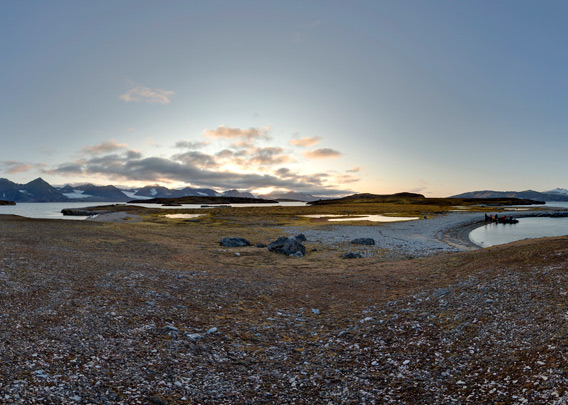 As all my photos taken onshore in bird reserves and similarly protected places in Spitsbergen, such as Sørkappøya and Moffen, these panoramas were shot in late September. But then, the low sun brings some stunning light to the arctic landscape!