Operafjellet is a mountain with a plateau-shaped top east of Longyearbyen, on the north side of Adventdalen. The top plateau is about 2 kilometres wide and 900 metres high.

Operafjellet became tragically famous on 29 August 1996, when the largest disaster happened that ever occured in Svalbard on land. The crew of a Russian plane lost orientation in poor weather conditions during the approach to Longyearbyen airport and collided with the steep eastern slope of Operafjellet, above Koslådalen. All 141 people on board were immediately dead: crew, workers and staff from Barentsburg and Pyramiden, some of them with their families. A little memorial site at the foot of Operafjellet, near Koslådalen, is dedicated to the commemoration of the victim of this airplaine crash.

As any opera, the „opera mountain“ has got several divisions: The various parts of the mountain are named Tenoren („the tenor“), Dirigenten („the conductor“), Alten („the alto“) and Bassen („the bass“). 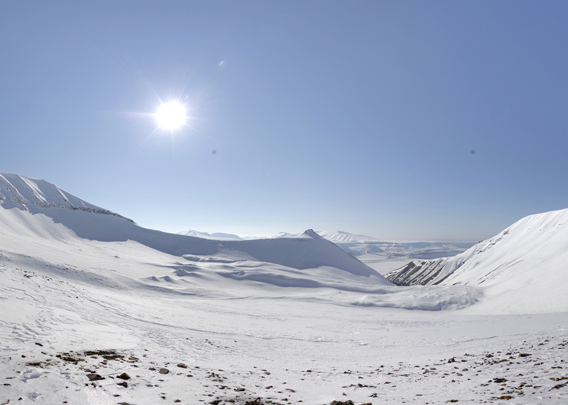 I shot these panoramas during a tour in May 2019. The idea was to climb Bassen, the largest and highest plateau on Operafjellet, from the north side, so we followed Ugledalen („the owl valley“) to its higher reaches. The slopes are steep, so be aware of the avalanche risk! You can see Longyearbyen while being surrounded by stunningly beautiful scenery and, most likely, complete silence other than the noise that you make yourself.

Operafjellet panorama 2: Between Alten and Bassen 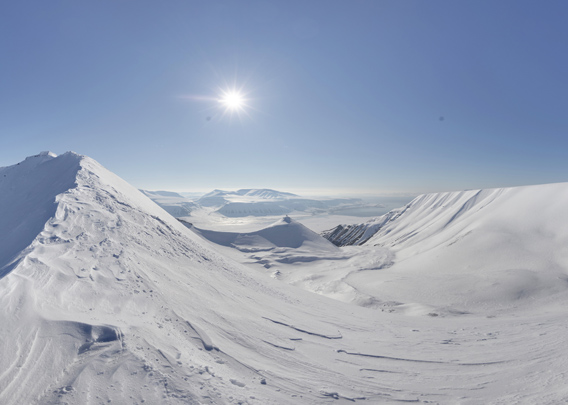 But, alas, to no avail – the ascent that we had envisaged turned out to be too steep. It was the ridge on the north side of Bassen. But in case of a floe avalanche, it would have been a free flight down either side of the ridge, a risk that we were clearly not happy to accept. And I have to admit that I was about to call it a day – Bassen would still be there on a later occasion – but Kristina was still highly motivated so we went for another approach despite the advancing time of day (or, rather, night).

This time, we approached Bassen from the west, trying the ridge between Tenoren and Bassen. This ridge is also quite steep, but within reason (you may obviously have a different judgement, depend on various factors including weather, surface conditions and your personal experiences and abilities). During the ascent, we were next to the famous „champagne glass“, an eye-catching snow field with a very conspicuous shape of – surprise – a champagne glass once the surrounding snow has disappeared. Every year, the local newspaper Svalbardposten announces a competition: you can guess when the base is broken. This is usually the case in late July, when the thinnest part of the snow field, the connection between the cup and the foot, is gone. 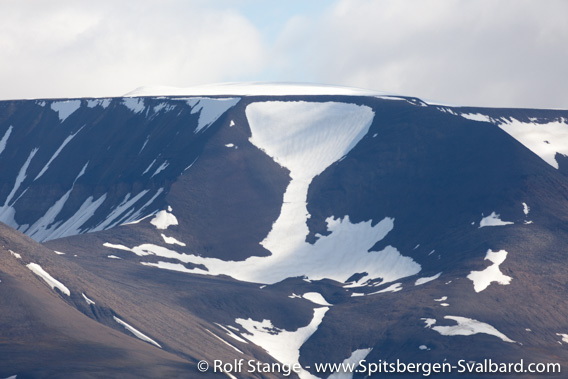 The “champagne glass” on Operafjellet (mid July), seen from Longyearbyen.

Experienced skiers use the champagne glass or the surrounding slopes for fast descents from Operafjellet! 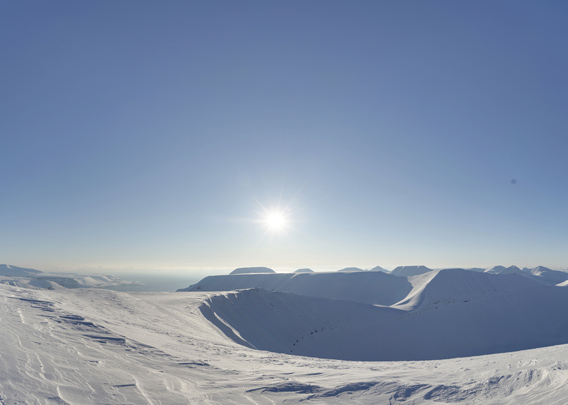 On the top plateau of Bassen, the highest part of Operafjellet, there is a small ice cap with the classical hour-glass shape. It is not exactly an eye-catcher most of the year, when the whole plateau is snow-covered, as it is then just a gentle elevation within the snow surface. The highest part of Operafjellet, 960 metres above sea level, is on the northern side of this ice cap. The view from here? Mindblowing! 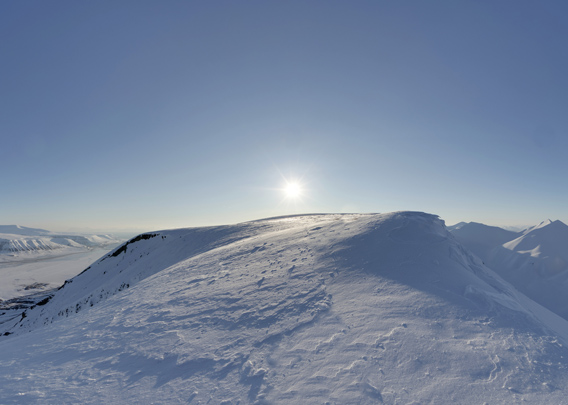 Up to here, we had done quite a few kilometres (considering our detour in Ugledalen) and we had been out for many hours, but as you are up on Bassen, you shouldn’t miss the view from the southeastern corner of the plateau. You can see all of the mighty Adventdalen and its surroundings, central Nordenskiöld Land, and that is definitely worth the effort!