Home → Spitsbergen information → History → The race to the pole 3 …

The race to the pole 3: Ny-Ålesund

History of Spitsbergen - Amundsen and Nobile 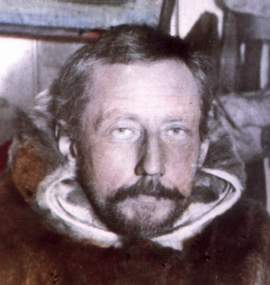 After Wellman, it remained calm again for a couple of years regarding attempts to reach the pole from Svalbard.

In the meantime, the expedition of the German count Zeppelin showed in 1910, that improved airships might indeed be useful in the arctic, although they didn’t have a ‘Zeppelin’ (commonly used for ‘airship’ in German), ‘just’ the count with the same name. They sailed mostly in the Kongsfjord and Krossfjord with their ship, the large cruise ship Mainz, and a smaller expedition ship that could also enter smaller bays. Prince Heinrich of Prussia, brother of emperor Wilhelm II., was one of the expedition members.

Roald Amundsen was still busy with his Maud-expedition in the northeast passage, but he left the Maud when it he got a bit bored in the end – too much science, too few adventures. He rather focussed on reaching the pole by air, as more advanced aircraft became available. The north pole had been his great dream for the whole of his life. He chose Ny-Ålesund as a base for his expeditions, as this was located quite close to the pole, it was easy to reach by ship and the workers of the coal mine could assist him, which meant that he could do with  reduced own labour force, which made the financial side much easier.

For his first attempt, Amundsen brought two Dornier-Wal-Seaplanes, N-24 and N-25. They started on 21st May 1925 and did not return, so everybody thought they were lost for good. After a crash landing on the pack ice near 88°N, Amundsen and his five men first had to build a runway in the uneven ice to enable one of the two aircrafts to take off again. Norwegian pilot Riiser-Larsen accomplished a masterpiece when he started the one remaining aircraft with two crews on board (six men altogether) from the short runway on the ice. Lack of fuel forced them to land again near the northern coast of Nordaustland, where a Norwegian sealing ship picked the expedition up and brought them back to Ny-Ålesund.

Amundsen did not hesitate and started a second attempt in 1926. After the experience of 1925, he wanted to try an airship this time. Italian Umberto Nobile constructed the airship Norge for Amundsen and navigated it up to Spitsbergen. While the Norwegians together with Nobile and Amundsen’s American sponsor Lincoln Ellsworth were still busy with preparations, the American Richard Byrd showed up with his Fokker-aircraft Josephine Ford. Byrd started 09th May 1926 and came back 15 hours later, claiming that he had reached the pole. Nowadays, most historians agree that Byrd can not have reached 90°N, but Amundsen could not know that. He started a few days later with Nobile and Lincoln Ellsworth as well as an Italian crew on board the Norge. The flew across the pole, dropped their countries national flaggs and reached Alaska without difficulty. The most dramatic part of this expedition came later, when Amundsen and Nobile, the young nation of Norway and fascist Italy, fought over the honour.

The result was that Nobile tried once more in 1928 to show everybody that they could do it without Norwegian contribution. The result is one of the most well-known dramas in the history of the north pole. The Pole was reached, but the Italia crashed on the pack ice north of Nordaustland on the way back, somewhere near the little island of Foynøya. A part of the airship disappeared together with 6 men who were never to be seen again. 9 men landed on the ice, amongst them Nobile, who was seriously injured during the crash.

During the following weeks more than 20 aircraft and 14 ships from 6 different nations tried to find the lost expedition. Amongst them was Amundsen, who took off on 18 June in Tromsø with the French seaplane Latham. Latham disappeared with her crew including Amundsen, she probably crashed somewhere near Bjørnøya (Bear Island). After a while, Nobile’s radio operator managed to send an SOS with their position. Subsequently, Swedish pilot Ejnar Lundborg managed to land on the ice near Nobile’s camp and evacuated the most seriously injured man: Umberto Nobile, together with his little dog Titina (this did not make a good public impression). Unfortunately, Lundborg crashed his plane on the second attempt to land and he was then stuck together with the remaining Italians. All were later picked up by the Sovjet icebreaker Krassin (Lundborg was actually picked up by another Swedish plane shortly before the Krassin arrived).

In the meantime, a party of three men had tried to walk over the ice without getting very far; one of them, the Swede Malmgren (meteorologist and the only non-Italian crew member of the Italia) disappeared under uncertain circumstances, the two Italians who were with him were also rescued by the Krassin.

Members of the 1926 trans-polar flight in Seattle: Riiser-Larsen, Amundsen, Ellsworth, Nobile (and his dog) 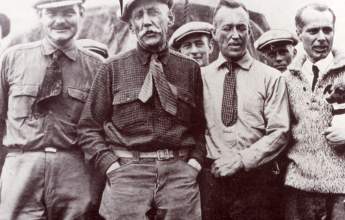 With the 1926 flight, both poles had definitely been reached, at least by air, and it was clear that no major islands remained to be discovered in the arctic. This was thus the end of the heroic age of arctic exploration, which focussed on reaching even higher latitudes and spectacular discoveries. Gradually, the »heroic age« gave way to systematic science.