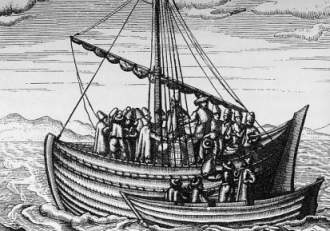 Orthodox cross (reproduction) at Russekeila, Isfjord. The hut in the background was built by Polish scientists in 1978 as kind of a kitchen. 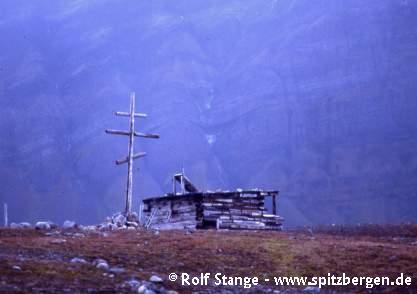 The Pomors were people who lived in the north of Russia, at the coast of the White Sea. They were hunters and fishers and had a long tradition of hunting in the arctic. Without any doubt, they were active in most parts of Svalbard for centuries. The timing of their arrival is, however, uncertain. A questions which has been discussed for a long time – and has not been answered yet – is to whether the Pomors came earlier than 1596, the year of the official discovery of Spitsbergen by the Dutchman Willem Barentsz. This is a hypothesis which archeologists especially from the Sovjet Union tried to prove during the cold war. 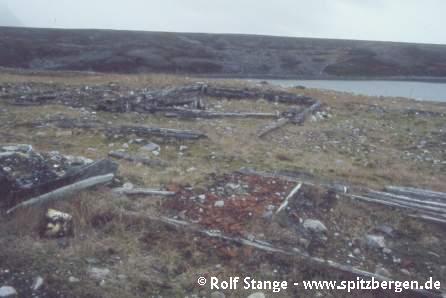 Neither historical nor archeological evidence is really clear, but it is at least possible that the Pomors had several hunting stations in Spitsbergen during the 16th century, decades before Barentsz. About half a dozen sites with remains of such stations from those years have been found on the west coast of Spitsbergen; the problem is, that dating by means of dendrochronology (tree rings) refers to the age of the wood – the year when the tree was cut – and not to the the year the hut was built, which could also have been moved from Russia to the Arctic. Anyway, until now the Pomors are the ones who can claim the longest history of more or less continuous activities and settling in Svalbard: the last stations were finally abandoned in the 19th century. 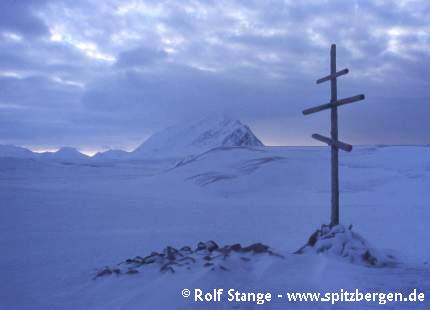 They came to hunt arctic wildlife and for this purpose they built hunting stations of quite some size; not only a small hut as did Norwegian trappers of the late 19th and 20th century, but almost small settlements with main building, forge, storage buildings, sauna etc. Up to 20 people may have wintered there together, and games such as chess boards have been found. But their stay in the Arctic was almost always temporary, as their families lived on the mainland, to which they returned after a year. Svalbard provided hunting grounds, but not a real home. There are exceptions such as the famous patriarch Ivan Starostin (or Staratshin, different spellings exist) who is said to have lived 32 years at Russekeila in Isfjord, including at least 15 years without returning to Russia, until he finally died in 1826 at Russekeila. His grave is supposed to be at Kapp Starostin, close to Russekeila.

One of very few original orthodox crosses from the Pomors’ days that are still standing.
Murchisonfjord, Nordaustland. 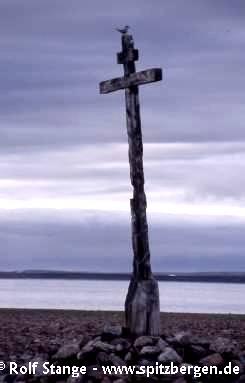 Remains of hunting stations can be seen at the coast in most parts of Svalbard. Large, wooden orthodox crosses were commonly put up for religious purposes and to make orientation easier, but most of those fell victim to the weather and to later visitors in need of firewood. There are some remains of orthodox crosses lying on the ground, but standing original crosses are very rare. There are actually only two left, both on small islands in Murchisonfjord on Nordaustland. 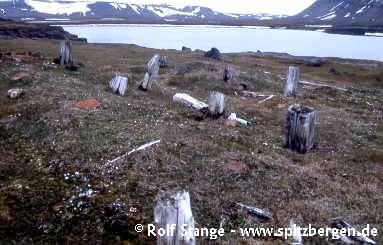 A characteristic of Pomor settlements are remains of bricks which were used to build the oven (Norwegian trappers brought metal ovens with them). 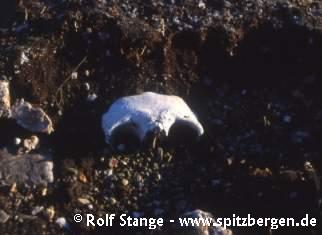